“Trust in the Lord with all your heart and lean not on your own understand; in all your ways acknowledge Him, and He will make your paths straight.” – Proverbs 3:5-6
What’s so wrong with leaning on your own understanding?
A while back I was assembling a crib at the house, getting ready for our next foster child placement (blissfully unaware that the next kid would be a 16-year-old). As I started, I decided that, hey, I’ve done this before, even took some pictures to help me remember how it was done, so I don’t need to use the instructions this time. You can guess how the rest of the story went. I ended up with a wonky crib and an extra hour of work on my hands, taking it all apart and putting it back together again.
Our lives are a lot more complicated than assembling a crib. All these demands on you, all these people to deal with, all these decisions to be made (big and small), temptations to navigate, fears to face. There’s just so much. It’s complicated. But if I can choose between leaning on my own understanding for all of this and trusting in the Lord and looking to God’s Spirit for some instructions, why on earth would I try to do it on my own?
I love how The Message Bible translates this proverb: “Trust God from the bottom of your heart; don’t try to figure out everything on your own. Listen for God’s voice in everything you do, everywhere you go; he’s the one who will keep you on track.” We have to listen for God’s voice. Amy Vogel writes that anytime she catches herself leaning on her own understanding, she doesn’t beat herself up over it. Instead, she turns to the Holy Spirit and asks, “What do You think?” We’ve got to listen to hear God’s instructions.
But it all starts with trust. Trust in the Lord with all your heart, from the bottom of your heart. Only when we trust God’s guidance, trust that God really does know better, can he keep us on track.
Do ever think you know how to handle something better than God does? How did that turn out?
Are you in a situation now that you’ve been trying to handle on your own? Have you tried asking the Holy Spirit, “What do You think?”

A while back I read Jen Hatmaker’s book 7: An Experimental Mutiny Against Excess. One of the things that makes the book so good is her style. She’s just very open and honest about her faith and where she falls short. Like in this passage:

It does to me.

One time Jesus was talking about money, and he said “where your treasure is, there your heart will be also” (Matt 6:21). I think that’s just as true of our time: where our time is, there our hearts will be also. Where we spend our time reveals what’s closest to our hearts. If something is important to us, we say we’ll make the time.

So… what do you make time for?

DWTS? Fishing? Facebook? Studying the Bible? Prayer? You’re probably making time for the relationships that are important to you—your spouse, your kids, your parents. What about your relationship with Jesus? Maybe you’re making time to serve God through the church. That's great, and that’s important. Jesus notices that. But he’s also hoping for a little one-on-one time, for a chance to talk, to reconnect, to get to know each other better. How are you doing on that front?

I hope you'll take some time to really chew on each of these questions:

If our time reflects our priorities, then where are your priorities right now? Are you happy with them, or do you need to reprioritize some things?

Have you ever paid attention to how much time you spend on your phone or watching TV? Try tracking that for a week. You may be surprised how it adds up.

What is something that really could take up less of your time, so that Jesus could have some more?
Posted by Nance at 12:00 AM No comments:

The Heartbeat of God

It's been almost a year since I've posted on the blog. I never decided to stop. I simply haven't had time or given it much thought. I realized this morning that, rather than shuddering the doors, I could offer you, dear readers, the weekly devotionals that I've been writing for the leadership team in our congregation.

This is the devotional from this week. 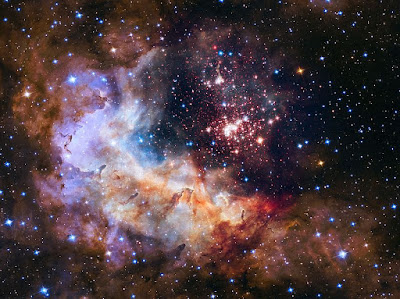 Last year I read a book about the universe written by some astrophysicists, and chapter 1 was all about just how big our universe is.


Here’s some scale: McDonald’s has sold more than 100 billion hamburgers over the years. If you laid 100 billion hamburgers side to side, you could circle the planet 216 times, and then use the leftovers to stack to the moon and back. 100 billion hamburgers.
Well, in our galaxy there are 300 billion stars. I don’t mean in the universe—just the Milky Way. And there are billions, maybe trillions, of galaxies like ours in the universe, all with their own hundreds of billions of stars. Translation: we can’t even understand how vast space is.
Now some people (including some of those astrophysicists) would say that, in a universe so incomprehensibly big, how could there possibly be a God who cares about our brief little lives on this tiny little speck called Earth? Our lives are obviously not that special, they say.
But I’m not sure those folks understand what “grace” means.
Because the things we believe about God, they’re not about anything you can measure: sizes and distances. They’re about grace: love that doesn’t make any sense, that reaches into our lives to pull us close. God doesn’t love us because we’re special. God loves us because God’s heartbeat is grace.
The Psalms understand just how tiny our lives are. “What are human beings that you are mindful of them, mortals that you care for them? Yet you have crowned them with glory and honor” (8:4-5).
That “yet” in Psalm 8 tells us more about God than even the most gifted scientist ever could.
That “yet” is the heartbeat of God.
That “yet” is grace.
-
Do you ever stop to think about how vast our universe is? What does that tell you about the Creator who made it?
Or do you ever stop to think about God’s grace, the love that doesn’t make any sense? What does that tell you about God?
Posted by Nance at 12:00 AM No comments: