not by bread alone 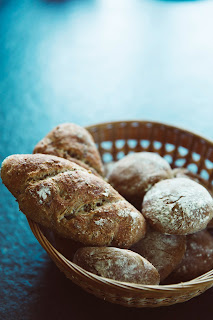 This Lent, I'm learning to trust.

That wasn't the plan when Lent began, not exactly. I decided on a few daily changes to make, plus some new weekly routines, ways to commemorate Jesus' sacrifice on Fridays. I also decided to commit to some traditional fasting, abstaining from food, one day a week. All in all, nothing remarkable—just more engagement with the season than I've done in the past. I wanted to experience Lent more deeply this year.

Then I got the call: I'm leaving the church I've been serving in Natchez for the last five years and being reappointed to a congregation in Sumrall, MS.

Not surprisingly, this has been both exciting and heartbreaking. It's the first move for me, so this is all new, but I still knew there would be these mixed emotions, the bittersweet quality to it all.

What I didn't know was the trouble I'd have trusting.

It's not a question of whether I ought to go to Sumrall. I have absolutely no doubt that the bishop and the cabinet made the right choice in sending me to Natchez in the first place, and I trust them to listen to the Spirit and to recognize where God could use me next. Some more seasoned United Methodist ministers may chuckle, but I have faith in the process.

The trouble is entrusting this church to someone new.
Don't get me wrong. I don't have any reservations in the world about the pastor who is taking my place. She seems great.

As I've been fasting each week during this Lenten season, I've frequently been reminded of Jesus' words to Satan in the wilderness, when he was tempted to break his fast and turn some dusty rocks into fresh loaves of bread. Jesus told the tempter, "man shall not live by bread alone, but by every word that proceeds out of the mouth of God" (Matt 4:4).

With those words echoing in my head over the last couple of weeks, I've started to see that, in my ministry, particularly as a preacher, I've been trying to "live by" relevant topics, solid research, clever analogies, appropriate injections of humor, and practical takeaways. I've been trying to live by hard work and skill.

But those things are bread.

And man shall not live by bread alone, but by every word that proceeds from the mouth of God. A minister of all people cannot live by bread alone, but must live by the words that come from God and set an example and guide the church to do the same. After all, don't we believe that "neither the one who plants nor the one who waters is anything, but only God who gives the growth"? (1 Cor 3:7) Don't we trust in that?

Or would we rather hold on to our bread?

So I'm grateful for Lent. I'm grateful for the fast. Because right now, while I'm trying to learn to trust, I need to remember those words. I need Jesus to whisper to me again and again about living by every word that proceeds from the mouth of God.
Posted by Nance at 12:00 AM 1 comment:

the Bible and the ban

"What would Jesus say about our immigration policies and problems?"

It was 'question night' at the church, a risky (some would say stupid) thing for a young pastor to do. Most of the questions stayed away from anything that smelled of politics, but as I pulled this slip of paper from the glass bowl and unfolded it, I was in for a surprise.

Now, I don't actually think of that as a political question. I think of it as a biblical question and a question of how to live out our faith in the world. But once politicians and pundits latch on to an issue, we all start to think of it as a political topic. Unfortunately, the result is often that ministers feel helpless to speak out on things that the Bible speaks out on because--you shouldn't go there preacher. That's political.

But it was question night, and someone had asked, so I went there.

What would Jesus say? I told them that, in my opinion, Jesus did say something that speaks to the issues surrounding immigration in the US today. Then I read from Matthew 25: When you feed the hungry, clothe the naked, care for the sick, or welcome the stranger, you're doing it for Christ. And when you turn away people in need, when you turn away those who need some place to go, you're turning Jesus away (25:44-45).

There's a reason over 100 evangelical leaders, including Timothy Keller, Max Lucado, and Bill Hybels, took out a full-page ad in The Washington Post last month, in the wake of the President's first attempted moratorium on immigrants and refugees from several Muslim nations, to call on Mr. Trump and the vice-president to support refugees. They were faithfully witnessing to Jesus' teaching.

There have been, unfortunately, many other evangelical voices supporting the President's actions. These voices argue that the call for Christians to love and care for others does not apply to the state. They point out that even the city of God in the book of Revelation has walls to keep "undocumented intruders" out (though they don't wrestle with every detail in Revelation). Or, as Franklin Graham did, they act as if the Bible doesn't really say anything about our situation. Meanwhile, many more evangelical readers have cheered these voices on, thanking them for offering a clear, 'biblical' response to the naysayers.

Of course, technically, they're correct: the Bible does not that say that the United States of America has to receive refugees from Syria, or welcome anyone else into the country. As long as you don't want to call America "a Christian nation," the US can ignore Jesus' teachings and turn away strangers left and right.

Those of us who call Jesus our Lord, however, don't have that luxury.

As a pastor, my biggest concern isn't that the most powerful nation in the world would turn away people in need to whom we could easily offer relief (though, obviously, that is a concern). What worries me the most is seeing Christians embrace this position and rejoice in the evangelical support for it, even though it flies in the face of God's expectations for the faithful.


For the Lord your God is God of gods and Lord of lords, the great God, mighty and awesome, who is not partial and takes no bribe, who executes justice for the orphan and the widow, and who loves the strangers, providing them food and clothing. You shall also love the stranger, for you were strangers in the land of Egypt.

The word of God for the people of God - thanks be to God. Right?

As Rev. Mark Wingfield pointed out for Baptist News Global, this passage in Deuteronomy is "one of 92 times the Hebrew word we would translate to “immigrant” in English appears in the Old Testament. And in every case, the admonition is for acceptance and welcome and kindness."

I'd say the teaching of the Bible on this issue is pretty straightforward.

So, since when are evangelicals the people who do their best to explain away scripture's demands?

The arguments I've heard against welcoming immigrants and refugees remind me of the arguments (which evangelicals usually chafe against) for non-traditional views of sexuality:
Frankly, the biggest difference that I can see between these two lines of thinking is that the arguments against welcoming refugees are much weaker than the arguments for affirming same-sex relationships. After all, there are only about a half a dozen verses in the Bible that speak directly to the question of homosexuality, but there are dozens and dozens of verses about welcoming "aliens" and "sojourners." And while advocates of full inclusion of LGBT couples into the life of the church frequently point out that Jesus never says a word on the topic*, the same cannot be said for the issue of welcoming the stranger.
Yet in the face of arguments like these, evangelicals have always insisted that faithful Christians must resist the cultural tide and the emotional tug and resolutely affirm the clear teaching of the Bible.

There are probably all kinds of factors contributing to this evangelical rejection of biblical teaching.

Part of the problem is surely that we simply don't know that the Bible calls God's people, over and over, to welcome immigrants. After all, that's probably never seemed like an important topic to preach on. The preachers themselves know what the Bible says (Why else would 86% of Protestant pastors say that Christians should "care sacrificially for refugees and foreigners"?), but they haven't been teaching it. (Why else would 76% of white evangelicals have approved of the ban?)
Another part of the problem is that evangelical Christianity in the US has become so aligned with Republican politics that it's probably difficult for many to believe or accept that the party-line would diverge so dramatically from biblical teaching.

I think the biggest part of the problem, though, is fear.
That's why evangelical commenters are so grateful at the end of an article assuring them that Syrian refugees aren't their problem. We are afraid of these people. I get that. We're thinking about those plumes of smoke coming out of the Twin Towers, the police lights flashing outside the Pulse nightclub, and we're afraid of what's going to happen next. Fear keeps us from accepting that refugees are already well vetted and pushes us to ignore the uncomfortable call of Christ.

I don't think that we have much to fear from these people who are running for their lives and their families' lives, thankful for any safety and stability they can find. A study last year determined that Americans have a 1 in 3.6 billion chance of being killed by a refugee in the US in any given year. 1 in 3.6 billion!

But even if the threat were greater, that wouldn't be an excuse for those of us who follow Jesus. After all, taking up your cross isn't safe. It means you're walking to your death. But that's the kind of love Jesus modeled for us, and "perfect love casts out fear" (1 John 4:18).

-
*Though Jesus never addresses homosexuality directly, many do argue that his reference to Genesis in Matthew 19:4-5/Mark 10:6-7 is an indirect affirmation of traditional, exclusively-heterosexual marriage.
Posted by Nance at 12:00 AM No comments: