reflections on a nerdy trip 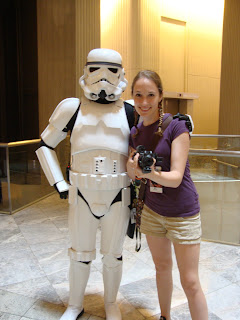 Emily and I spent Labor Day weekend in Atlanta, at an event called Dragon*Con. Dragon*Con is a gathering of fans from all over the country—nerdy fans. Fans of Star Wars and Star Trek; fans of comic books and fantasy novels; fans of anything nerdy that you can imagine. The convention is filled with special events, like celebrity meet-and-greets, panels featuring the stars of different TV shows, and gladiatorial combat between people’s homemade robots, you name it. Oh, and it’s filled with people, to the tune of 40-50,000, all crammed into four major hotels in downtown Atlanta, when they’re not clogging the sidewalks and restaurants all around. Did I mention that almost half of these people are in costumes? This is the recipe for first-rate nerdy thrills, and Emily and I had a great time.

Since you’re here, you’ll have noticed that I’m a blogger and bloggers can’t go to something like this without turning around and writing about it.
So, here we go: Four Things I Learned At Dragon*Con


The last two things really struck me.
It should be pretty clear why. The Church is meant to be a place where people are involved in something good, something that can change lives. The Church is meant to be a community where there’s no division, no hostility, but like-mindedness and sincere fellowship. If people are drawn to these things, crave these things, shouldn’t people be drawn to, crave, the life of the Church?
And while some people are drawn to the Body of Christ like that, many are not—many of the people at Dragon*Con are not.

Really, why? What is it that the Church is not doing, how is it that we’re falling short of our purpose? What perceptions of the Body do people outside have that obscure or overshadow whatever else we may be and do?

And how can we change this? What do we need to be doing to make apparent the new kind of life that God is calling us to? Because people are drawn to goodness and love, selflessness; people are drawn to authentic welcomes and genuine interest, impartiality—the things the Church is called to be and do. How can we show these people that they can find what they’re looking for in Jesus and in the community he called together, the community God energizes with his Holy Spirit?

Why do you think people are not drawn to your church? What has your congregation done to try and make the Body of Christ more visibly faithful before the world around you? What can you do?
Posted by Nance at 12:00 AM

Those of us who are on the inside know that all over the world the church is every day involved in teaching the truth, in healing the sick, in helping the poor, in lifting people out of slaveries of various kinds, and giving purpose to people's lives. I think a big part of our problem is simply a bad reputation.
When does the Christian church make the news? When something bad happens or there is a schism or some quacks protest at a funeral. Clerics are almost universally depicted as villans or bafoons in movies.

Of course, the church is not the only institution that has a bad reputation right now: have you seen the approval rates for the three branches of our government? Or our business leaders on WallStreet? Or our sports leaders (Joe Paterno anyone)? Part of our problem is a media that is obsessed with the negative and, in turn, is perpetuating a culture of cynicism.

Part of our problem is that we Christians really do have fights, schisms, and hateful pastors and people. Some of that might be reigned in if the church were united (that is, if there as an ecclesial authority that was universally recognized that could defrock or even excommunicate the quacks and prevent schisms). But it seems the genie of seperationism is out of the bottle.

I think the only thing we can really do is what we are trying to do everywhere: engage people in relationships of love, serve publicly and self-sacrificially so that eventually people realize that the image of the church they have in their mind and the reality they are encountering are not the same - and just maybe this will arouse curiosity and a new openess of mind (though our culture talks alot about being open-minded, I'm not sure that we often are).

That's my thought - though I'd love to hear what deeper wisdom others may bring.