Martin Luther on authority in the Church

I grew up in the Southern Baptist church in Louisiana. One of the great strengths of that tradition is its emphasis on scripture: Baptists love the Bible, and they understand how fundamental it is to the Christian life. This, you'll sometimes hear, is a credit to the Reformation: Baptists are good Protestants--sola scriptura ('the Bible alone') people.
But is this really what the Reformation was all about? Did the reformers want to rid themselves of any authority other than scripture?
Well, let's see. In 1539, Martin Luther wrote a treatise entitled "On the Councils and the Church," where he spends a lot of time considering the issue of authority. Particularly, what authority should be granted to the Church Fathers and the councils of the ancient Church--specifically the councils of Nicaea (325) and Constantinople (381) that produced the Nicene Creed and the councils of Ephesus (431) and Chalcedon (451)--and how such authority is related to the authority of scripture.
Luther admits up front that "the fathers were occasionally very human, and had not overcome what is written in the seventh chapter of Romans." As such, these men can't be entirely trusted--scripture must be our master and judge. Here he's actually echoing the great Church Father, Saint Augustine, who once wrote: "I have learned to hold the Scriptures alone inerrant. Therefore I read all the others, as holy and learned as they may be, with the reservation that I regard their teaching true only if they can prove their statements through Scripture or reason." Again, scripture is the judge, and by it the Christian must measure the words of the Fathers.
Luther turns next to the question of the councils. It's important to remember, he stresses, that the councils and their creeds do not present new articles of faith--they simply reiterate and defend traditional ones found in scripture. In this way, the authority of the ancient Church councils rests entirely on the authority of the Bible: “if there were no Holy Scripture of the prophets and apostles, the mere words of the council would be meaningless, and its decisions would accomplish nothing.”
So far, there's nothing for a Baptist to argue with here. Luther wants us to judge the Fathers by their faithfulness to scripture and to remember that Nicaea, Constantinople, and the other councils stand on no foundation save the Bible.
But as you read on, you might notice something curious.
While criticizing the canon laws of the Roman Catholic church, Luther remarks, "there is too much evil, so much that it crowds out the good, and... a greater measure of good is to be found in Scripture and also in the fathers." What's this? I thought the fathers had been set aside--they're too human to rely on. Is this just a slip of the tongue? Not likely, as that's the second time he makes such a remark in one paragraph. What then?
Martin Luther is making an assumption that someone raised among Southern Baptists would not make, and this is why his words may seem contradictory to us. Luther takes for granted the authority of the Church Fathers, as well as that of the councils. His treatise does not set out to establish their authority--this is a given--but only to show us how to understand that authority rightly. It's an authority that is ever subject to scripture. That is the position of the Protestant reformers (or at least Luther and Calvin, the two everyone is interested in claiming).
And even here, is there really anything for the Baptist to argue with? After all, truth is truth, and it has a claim on us, right? It doesn't matter if your pastor or Saint Augustine says it--if it proves true, according to scripture, then you need to pay attention.
But why is Luther so interested in these Church Fathers anyways? Why not just read the Bible, if it has the final say? This question might sound good at first, but I think it only really makes sense if you haven't read the Fathers. Luther was convinced that there was a great measure of good in their works because he knew them, and he knew from experience that there 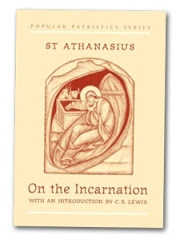 are treasures stored therein. If you want to know why Martin Luther thought so much of these ancient Christian writers, then you should just go pick one of them up and see. Athanasius's little book, On the Incarnation, is a great place to start (and you can get it with an introduction by C. S. Lewis--always a plus!). If there is truth to be found here, then we Christians need to be looking for it (Phil 4:8). Martin Luther certainly thought that they could do us some good.
Posted by Nance at 8:02 AM

I wonder what Luther would think of the English Reformers' approach to this issue of authority. Certainly some of them (the Puritans) were very much in line with Calvin or even Zwingli, but the "Anglican" party that won out has the approach that is summed up by Lancelot Andrewes:
The orthodox faith that we believe is taught by
1 Canon
2 Testaments
3 Ecumenical Creeds
4 Ecumenical Councils and
5 Centuries of the writings of the Fathers...

But, now that I think of it, the Augsburg Confession (of the Lutherans) also has high regard for the teachings of the Fathers as part of the church's theological discernment.