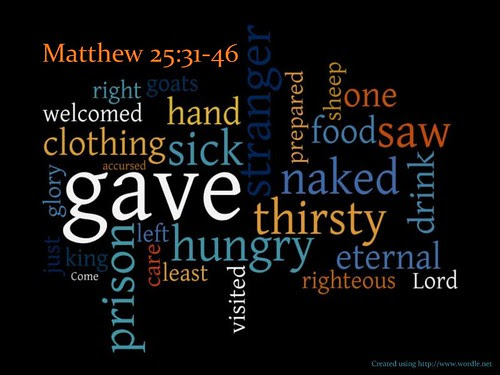 Last month a friend of mine remarked in the blog comments that, by being environmentally conscious, "we not only care for the environment but we in turn care for people who depend on the environment, which of course is all of us." This point is so simple, and so important. If present human exploitation of the planet's resources is indeed eroding the earth's capacity to support its inhabitants--present inhabitants or those of future generations--then Christians already, without any further theological rationale, have reason to protest, to model a new way of living, over against the wasteful and neglectful practices rampant today.

David Bookless, co-founder of A Rocha UK and author of God Doesn't Do Waste, has written on the intertwining of issues of justice and ecology. The below paragraph, from an essay in Mission in the Twenty-First Century: Exploring the Five Marks of Global Mission, offers a startling diagnosis of one point in this convergence. Consider this well (italics added):

Transforming the unjust structures of society must mean addressing not only the global injustices which prevent the poor from accessing development, but also questioning our very aspirations of development towards lifestyles we now find to be unsustainable. At the launch of the Stern Review on 'The Economics of Climate Change' it was rightly commented, 'The impacts are inequitable: poor countries will be hit hardest and earliest, when it is the rich countries responsible for three-quarters of greenhouse gases currently in the atmosphere'. Yet, the nettle that nobody will grasp is this - while we believe in justice and a better life for all and support the aspirations of developing nations, there is simply not enough to go around if all earth's citizens want to live at the levels the West considers 'normal'. Statistics vary from country to country, but if everyone wanted to live at the levels of the average UK citizen, we would need more than three planet earths to support the world's current population. Justice must look not only at increasing access for the majority, but at drastically reducing the living standards of the wealthy western minority.

Email ThisBlogThis!Share to TwitterShare to FacebookShare to Pinterest
Labels: Christian living, living with other creatures, quotes

I've heard a statistic similar to the one in that quote before. Staggering, no?

I think we can pull Adama and Tigh's comments into this, about how civilians can't stand to hear they can't have hot showers and wash their clothes. How dare we be asked to sacrifice our luxuries for the sake of the group. We earned the right to our lifestyle by being born in the Western world! Available resources be damned... or something like that, right?

The Western lifestyle is so privileged (as I sit here in our perfect apartment, using our wireless internet, thinking about the food in our well-stocked pantry and fridge). The "nettle", like Bookless says, is just remarkable when considered.

Presumably, anyone would admit-- admiring their own generosity-- to compassionately wishing that everyone on earth could live as middle and upper-class Westerners do. However, how many would be willing to drastically reduce their own standard of living to bring others up to that same lower standard?

I rather think we'd prefer to self-destruct in our entitlement and consumer driven mentality, and say good things about equality, justice, and using resources responsibly.

I guess most issues boil down to the same quandry: when you get right down to the sacrifices necessary, do you actually really *want* to *do* anything about it? Is the price too high? Or would we rather just stick to debate and gestures and goodwill towards men.