In October I had a the chance to see the popular atheist biologist and author, Richard Dawkins, give a talk at Duke University promoting his latest book, The Greatest Show on Earth. Now that my crazy semester is winding down, I have a chance to offer here some thoughts on Dawkins's lecture.
First let me say that I thoroughly enjoyed the talk. Dawkins--this is no surprise, as he is a professor--communicated clearly and held our attention well (though this wasn't hard given the audience, most of whom probably keep a copy of The God Delusion on their nightstands). One of my favorite quips came early in the talk: "Well of course there are gaps in the fossil record--we're lucky to have any fossils at all!"
But of course I wasn't their primarily to learn about evolution, though this is a subject about which I still have a lot to learn. I was itching--as was everyone else in the auditorium--to hear what Dawkins had to say about religion.
Much of this came in jokes about a 'designer' strewn throughout the lecture on evolution.
After describing in much and fascinating detail how well-designed the cheetah and the gazelle must be called, what a perfect hunter the one is and what perfect prey the other makes, he remarked with feigned exasperation 'whose side is the designer on??'
Another came after he described the recurrent laryngeal nerve, found in all mammals, that connects the larynx to the brain (only a few inches apart from one another), but which does not directly link the two--instead going first into the chest and wrapping around an artery in the heart for no apparent reason (a detour of about 15 feet in a giraffe, he noted). Dawkins rightly asked why the designer 'doesn't go back to the drawing board' like all good designers do? This poor design and wastefulness, he feels, speak against any such designer. (This oddity can be easily explained from an evolutionary standpoint.) 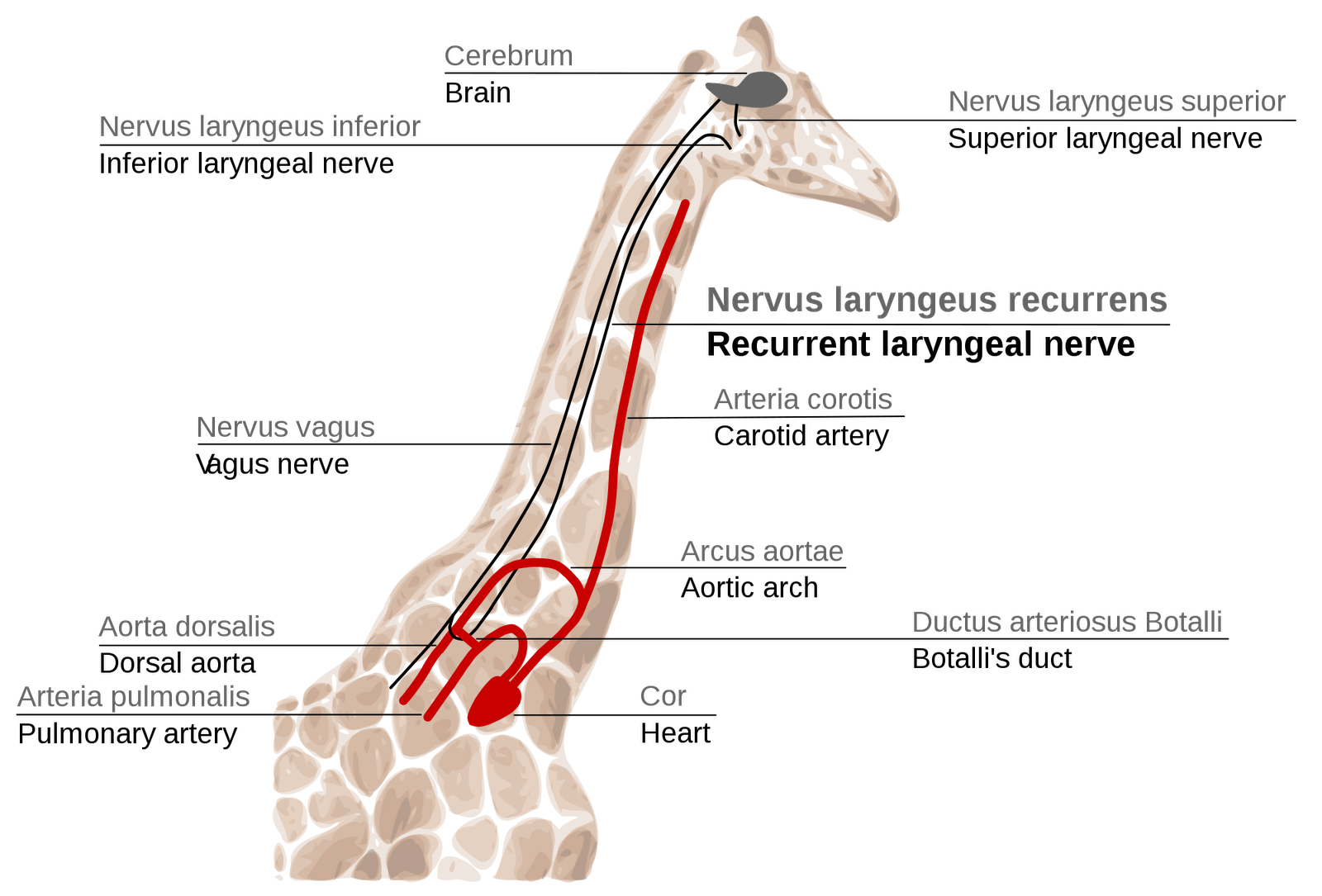 Most remarks about design took this sort of form. After a while I started to wonder why--why he only addressed a highly anthropomorphized designer, very active in creation?
But then Dawkins used the term 'intelligent design' a few times.
This is what he's responding to. He didn't actually speak a word to the traditional Christian understanding of the Creator, though his anecdotes and retorts were (to my mind) pretty damning for ID. It just doesn't work.
But by far the most interesting portion of Dawkins's talk came after the lecture, during the Q&A.
First off, the people asking questions--and Dr. Dawkins--don't seem to differentiate between "Creationists" and religious people in general. They didn't acknowledge that there could be any Christian who was not a textbook Creationist. This is of course simply absurd, though they don't seem to find such distinctions very important.
However, Dawkins did have a few surprises up his sleeve, both for me and for rest of the audience.
First, after a spiteful question about the place of a divinity school on a university campus, he had some kind things to say about the Bible as a piece of important and sometimes beautiful literature--literature that ought to be studied in the academy.
More surprising, however, was the final word. The last question in the Q&A came from a Christian--apparently the only such questioner--who wanted to know why Dawkins insisted on polemics, why he couldn't work with Christians on social issues they shared concerns over. The last words out of his mouth were: "Yes let's be friends, by all means." There wasn't much clapping after that.
In general, he just wasn't as hostile as his audience was hoping (or I was expecting), and this kind of took the wind out of their sails at the very last. To be sure, there were a few lines that were no doubt quickly immortalized as facebook quotes, like "Damn your preacher!" But as a rule, he wasn't as aggressive as you might suppose.
Something that was hard to miss in the talk was that Dawkins always comes back to evidence. He mentioned this to the last girl, that he didn't feel there was "evidence" for her opinions. It's absolutely key to his epistemology; everything hangs on it. Evidence, evidence, evidence. (There's an essay in his book The Devil's Chaplain to this effect, written as a letter to his young daughter.)
A few days after I saw Richard Dawkins, N. T. Wright gave a talk at the Divinity School. Afterwards I had a chance to talk to the bishop, and I asked about Dawkins and this demand for evidence: should Christians present historical arguments, for instance, about the Resurrection, as 'evidence'?
Wright said no. No, but what we can do, and what we must do, is present the history of the gospels plausibly, and we must show why the alternative readings simply do not hold water. In effect (and this isn't Wright, but my musing) we need to try our best to remove historical doubt. If what we proclaim is true, then this isn't impossible. Of course historical doubt is not the last obstacle to faith--it's just the only one Christians have the power to remove. Beyond this, the person coming to Jesus will have to respond to the gospel, however they will. Neither move will offer the 'evidence' they want.
Those are just a few thoughts I had in the days following Dawkins's visit to Duke. Take from them what you will. Hopefully in the coming weeks, after my last exam on Wednesday, I'll find time for some more real blogging. We'll see.
Posted by Nance at 3:08 AM No comments:

Barth on the New Testament miracles

As fundamentally astonishing stories, they function first of all in a formal way as a sort of alarm signal, which is the reason the New Testament likes to term them "signs." Scattered at times thickly and at other times more sparsely throughout the history of Immanuel, they alert the hearer and reader to a central fact: this history is concerned with a fundamentally new event which, although undoubtedly occurring within time and space, is not to be identified with other events occurring within the limits of time and space...
But what is the new element signaled by these miracle stories? ... To what do the following phrases point? " 'Rise, take up your bed and go home.' " " 'Come out of the man, you unclean spirit!' " " 'Peace, Be still!' " as was called out to a stormy sea. " 'You give them to eat!' " as was said concerning the five thousand who were hungry in the wilderness. " 'Lazarus, come out!' " " 'He has risen, he is not here.' " According to the biblical testimony, what happened following such statements was always a change in the ordinary course of the world and nature which threatened and oppressed man. Though these changes were isolated and temporary, they were nevertheless radically helpful and saving. What took place were promises and intimations, anticipations of a redeemed nature, of a state of freedom, of a kind of life in which there will be no more sorrows, tears, and crying, and where death as the last enemy will be no more. What is communicated under the form of these little lights is always the reflected brightness of the great light which draws near to the men of the present in the form of hope. What is at stake is the summons, " 'Look up and raise your heads, because your redemption is drawing near' " (Luke 21:28). This kindling of the light of hope is what is really new; it is the really surprising element in the biblical miracle stories.

Evangelical Theology: An Introduction, 67-69
Posted by Nance at 7:30 AM No comments: