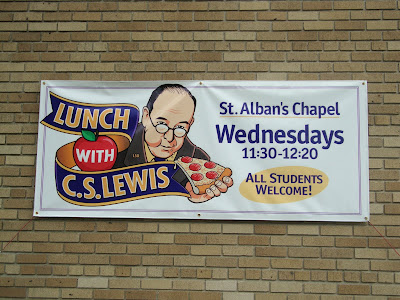 This is the greatest advertisement I've ever seen. Bar none.
A special thanks to Emily Claire Ryder for the lovely photo.
Posted by Nance at 9:32 PM 6 comments:

RELEVANT: why twentysomethings are out of the gay marriage debate

I just read this short article from RELEVANT, speculating as to why my generation--or, more specifically, the Evangelicals of my generation--by and large are not entering into the debates over gay marriage. The author points to four main causes for this silence: the number of openly gay friends and loved ones these young Evangelicals have; we are weary of the caustic rhetoric that these debates usually evoke; the hypocrisy of a condemnation of same-sex marriage that is mum on the divorce rates in churches; and "different categories." By this, the article refers to a growing view that an orthodox stance on sexuality doesn't necessitate an opposition to same-sex unions. Frederica Mathewes-Green, author of Gender: Men, Women, Sex and Feminism, is quoted from the book:

I can believe that my gay friends are engaging in something spiritually damaging, without asking the law to stop them. They can perceive that my convictions are grounded in an ancient spiritual consensus, not hate. We still won’t agree. But perhaps we can understand each other, and continue the conversation with mutual respect.

For Mathewes-Green, it seems, an attempt to forcibly prevent such unions through public policy goes beyond the Christian concern for spiritual well-being to an intolerant oppression of those we disagree with.

Here's my question: twentysomething, reading this (and most of you are twentysomethings), how do you fit into this picture? Is this debate one that you've spoken up on, or something that you shy away from? And why--do any of RELEVANT's reasons resonate with you?

I suppose I fall somewhere into the fourth group. I think that homosexual intercourse is plainly contrary to scripture; there's no way around that. And so I have to discourage other Christians from intimate homosexual relationships, and marriage would clearly stand under that umbrella. I have gay friends and relatives whom I care about, but I don't see that as any reason to excuse myself from the conversation. That's not a form I see concern taking. I rarely react to hypocrisy--it's far too prevalent and human a phenomenon to let that direct my course.
But I do find myself echoing Mathewes-Green often enough. I just don't see any excuse for an American legal repudiation of same-sex marriages. We live in a secular democracy, and the country's law is simply not bound by Christian moral teaching (much less a teaching that is hotly debated by the Christians themselves!). If that were how our legislation worked, then any extra-marital or pre-marital sexual relations should be outlawed, along with so many other things. At most, conservatives should hope to establish their 'one man, one woman' definition of "marriage," and then allow for a civil union institution that will grant totally equal rights and privileges to same-sex couples--though my thoroughly-untrained eye doesn't see any legal precedent or authoritative standard that could underpin such a move.

I understand that a lot of Christians, especially conservative Evangelicals, won't follow my thinking here. If you admit that it's a sin, they will say, then how can you support it? I don't. This is one issue (and not the only one that I have to face) where I find myself standing at a fork in the road, with the aims, hopes, and demands of democracy moving very clearly in one direction, while the aims, hopes, and demands of the Kingdom move full-force in another. This will happen sometimes; they are, after all, not the same thing. Democracy must pursue the rights and freedoms of the people, insofar as they do not disrupt the government. On the other hand, the Kingdom, regardless of what connections Christians have drawn for centuries, is not finally interested in rights and freedoms. The Kingdom of God is a matter of righteousness and peace and joy in the Holy Spirit (Rom 14:17). I don't support gay marriage... but I recognize that America ought to. This is just one of those issues where I cannot in good conscience be a good American.
I guess that means I'm out of the gay marriage debate.

Give me some thoughts. Again, what do you make of RELEVANT's observations? How have you been approaching this important and tender question? How has your church community? Why?
Posted by Nance at 9:57 AM 6 comments: