but now you must rid yourselves...

Lately I've been reading through N. T. Wright's commentary on Colossians--which has been chock-full of really brilliant insights--and I thought I'd share a bit.
Today I read his comments on Colossians 3:8. Here Paul is trying to show the Colossians what, practically, it means to take "off the old self with its practices and... put on the new self" (3:9-10), and so he exhorts the church: "Now you must rid yourselves of all such things as these: anger, rage, malice, slander, and filthy language from your lips." I think Wright's remarks on this verse, while simple, are powerful:

slander, speech which puts malice into practical effect... and filthy language, words which, either by their foul association or their abusive intent, contaminate both speaker and hearers. All such things are to be put away from your lips: one cannot always prevent angry or hateful thoughts from springing into one's head, but they should be dealt with firmly before they turn into words. It is not 'healthy', as is sometimes supposed, to allow such thoughts to find expression. It is certainly healthy to recognize and face up to one's own anger or frustration, and to search for proper and creative ways of dealing with it. But words do not merely convey information or let off steam. They change situations and relationships, often irrevocably. They can wound as well as heal. Like wild plants blown by the wind, hateful words can scatter their seeds far and wide, giving birth to more anger wherever they land.

The Church Fathers have come up several times in my recent posts on sola scriptura, and--though they've been popping up on this blog pretty consistently for over a year now--I feel like it's time to address some concerns that readers may have about them.
Before that, though, maybe a definition is in order. The Church Fathers are those men (yes, this group is basically entirely male) whose writings made up the bulk of Christian teaching and doctrine for the first several centuries of the Church's existence, from the early 100s and on. These are the ministers and theologians who represent the "Tradition" of the Church: their works have countered heresies, encouraged the Church in times of persecution, been subject to centuries of pious study, and guided God's people in interpreting the scripture throughout the history of the Church. Some of these were martyrs, some were monks, some bishops, others philosophers. Many were saints. Names like Augustine, Ignatius of Antioch, Athanasius, Origen, and Jerome come to mind. These men have, to varying degrees, shaped the Church over the millennia, laying the foundation for the churches of today.
If you would like to know my take on the authority of the Fathers, I'll just point you to my earlier post, "why not sola scriptura?". That's not an issue I want to take up here. Instead, I want to offer some brief responses to what are common misgivings that many modern Protestants--like the Southern Baptists whom I grew up among--have about the Tradition and the Church Fathers. Most of what I have to say is adapted from the introduction to a nice little book by an Evangelical scholar, Bryan M. Litfin: Getting to Know the Church Fathers: An Evangelical Introduction. Litfin addresses Evangelical distrust by going to the very issues that his students have struggled with over the years, and which he's had to confront.
So, let's jump right in.

These three points were taken from Litfin, but they've also been confirmed for me through experience. I've found the Fathers to be an indispensable source of wisdom and guidance as I've seriously studied scripture and given thought to my faith over the last few years. I hope that others might give them a chance and find the same.
And of course, the best way to form an opinion about the Fathers is to just read them and see for yourself. To anyone thinking of dipping their toes into the writings of these brilliant and godly men, I highly recommend St. Athanasius's On the Incarnation, with an introduction by C. S. Lewis. This is a fantastic little volume, and really accessible... the Lewis introduction doesn't hurt my opinion of it, either.
If anyone would like to share your experience of getting to know the Church Fathers--good or ill--I'd love to hear about them in the comments.
Posted by Nance at 8:23 AM 1 comment:

Email ThisBlogThis!Share to TwitterShare to FacebookShare to Pinterest
Labels: authors and books, the Church Fathers

From the BioLogos blog comes Would You Like Fries With That Theory? Karl Giberson, a "science-and-religion scholar" (whatever that means) has written this interesting and, I thought, entertaining post for BioLogos. Giberson apparently shares my healthy respect for experts. Any kind of experts.
Check it out--it's certainly worth the read.
Posted by Nance at 3:53 PM 1 comment:

Email ThisBlogThis!Share to TwitterShare to FacebookShare to Pinterest
Labels: other blogs, science

why not sola scriptura? 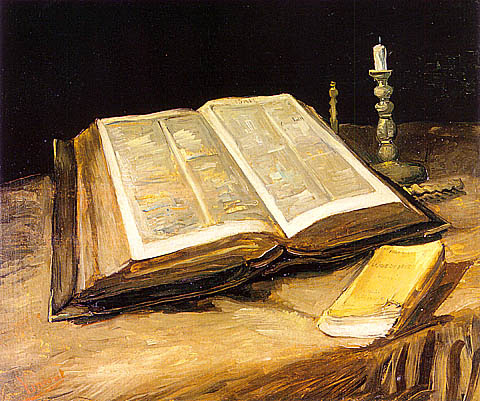 Growing up I was always told that the Bible forbade gambling. Now that I'm grown and I've read the Bible... I'm fairly certain that isn't actually true. The 'gambling verse' is just not in there. 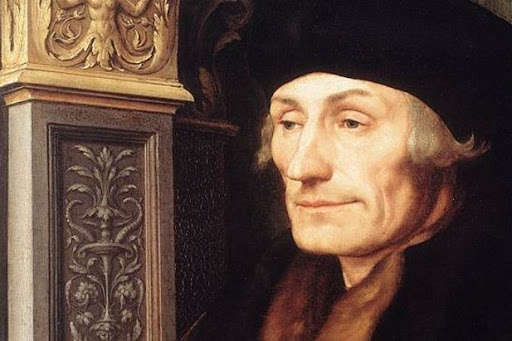 Nevertheless, I don't support gambling, and I found a man who sees the issue in much the same way that I do. The following is a quotation from Erasmus of Rotterdam, a 16th century Christian writer. Erasmus actually remained Roman Catholic as the Protestant Reformation broke out, though he did sympathize greatly with many of the Reformers' concerns. He simply wasn't willing to sacrifice the unity of the Church. He's also pretty well know as a Christian humanist--he's sometimes called the "prince of the humanists", in fact--but keep in mind that this is a far cry from modern, secular humanism.
So, now that we're all close friends, here is Erasmus's rather strong stance on gambling:

Throwing dice cost you a thousand gold pieces in one night, and meanwhile some wretched girl, compelled by poverty, sold her modesty; and a soul is lost for which Christ gave his own. You say, what is that to me? I mind my own business, according to my lights. And yet you, holding such opinions, consider yourself a Christian, who are not even a man!

Chaplain Mike, who has taken the reins of internetmonk.com, has recently posted twice on the topics of creationism and evolution:
To Be or Not To Be, or Why I'm Not a Young Earth Creationist
and
Update on the Creation Wars

The former is a much older piece by the late iMonk himself. Michael articulated well some of my own experiences with these questions:

If I came away with any suspicions that the young earth creationists might be wrong, it came from my developing an appreciation for Biblical interpretation, not from the Biology lab. Secular science didn’t turn my head. I learned that the people waving the Bible around weren’t necessarily treating it with the respect it deserved... many of my evangelical and fundamentalist brethren were not willing to let the scriptures be what they were or to let them speak their own language.


The latter piece is a bit less sensitive, but well said all the same. This piece was prompted by the recent happenings--that I was until now wholly unaware of--at Reformed Theological Seminary, where respected evangelical Old Testament professor Bruce Waltke was forced to resign after suggesting in an online video that the Church needs to take a new approach to the appraisal of scientific data concerning evolution.

I think these are both worth reading (though they're both relatively long) for those of you interested in or perhaps struggling with the issue. The top post by iMonk, especially, may be helpful to readers for whom this is still a very difficult topic.

If anyone by now is still unsure as to where I stand on these questions and is interested, I would point you to this post from about a year ago on wardrobe: Happy Birthday, Charles Darwin!
Posted by Nance at 1:08 PM No comments: