Being a Christian is not an alternative way--ethical, spiritual, religious, whatever--of being an individual. If you aren't going to read any further, I wanted you to read that.
Now, before I go on, let's talk about sex. 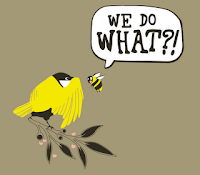 I've just begun reading real sex: the naked truth about chastity, by one of my professors, Lauren F. Winner. Dr. Winner wrote this book because the messages churches are offering about sex trouble her--they're "not that compelling"; "they seem theologically vacuous." That's not to say the message of the Church about sex is not compelling or is theologically lacking. Rather, the messages spoken today have been essentially reduced to finger wagging ("No you may not.") or catchy aphorisms... 'True Love Waits', anyone?
Statistics seem to indicate that she's right, and people really are not moved by the churches' teachings. If anything, "people are abstaining from sex not principally because they find the Christian story compelling, but because they find a popular tale about romance compelling--wait till you've really fallen in love." To me this is both sad and unsurprising.
It's sad, not just because I want to dog the world's message about 'true love'--though, that can be a deceptive and dangerous idea when not reflected on critically--but because the Christian message really is beautiful and captivating. All of this is, however, another topic for another post or (more likely) another author.
What I want to talk about is the meaning of 'membership' in the Body of Christ.
In her chapter 'Communal Sex: Or, Why Your Neighbor Has Any Business Asking You What You Did Last Night', Winner tries to argue that sex is 'communal, not private; personal, not public.' If that sounds odd to you, you're not alone. You can understand her best when you see what ideas she's trying to argue against:
Dr. Winner asserts that sex involves you in communities: the community of husband and wife, the community of your household. Sexual behavior forms people, and formative powers--like entertainment or education--are the concern of the whole society (hence our concerns for educational standards and regulations on entertainment, like film ratings). Yet, there are right and wrong ways to bring up the 'communal' topic of sex. Half-naked women on billboards and couples making out in the park are not the right way to go about the communal discourse on sex.
Some of her arguments are more convincing than others. The one that is thoroughly convincing to me is what she has to say about sex for Christians--the relationship between sex and the Church.
As good Americans, we tend to think quite a bit about individual liberty. "Life, liberty, and the pursuit of happiness", right?
Many people think that's the issue behind the abortion debates--'it's my body!' Christians take heat over condemning homosexual intercourse because 'they have a right to do whatever they want.' This is also one of the reasons accountability can be so awkward: 'I can't believe he tried to tell me to do that.'
But, Winner counters, "in the Christian universe, the individual is not the vital unit of ethical meaning." Christian ethics make reference not to the individual but to the Body, the community: "the People of God is a collective --not merely an aggregate of individual persons, each doing his or her own thing, but a body."
This is thoroughly convincing to me simply because it is thoroughly Biblical.
Recall Paul's famous discussion of the Body in 1 Corinthians 12:

For just as the body is one and has many members, and all the members of the body, though many, are one body, so it is with Christ. For in one Spirit we were all baptized into one body--Jews or Greeks, slaves or free--and all were made to drink of one Spirit... Now you are the body of Christ and individually members of it. (12:12-13, 27)

If you're not familiar with that passage, go read it all. It's a really striking picture of the Church, and this Body image is one of Paul's favorites for describing us.
We get so used to talking about 'members of a club', 'band members', or whatever else, that we forget the weight of 'membership' in the Church.
Our word "member" comes from the Latin word membrum--it means "limb." Our word 'dismembered' still carries the right tones: somebody is being chopped up.
To be a member of the Church is to be a limb, a body part, of the Body of Christ. That's Paul's whole point here. Though we see each other as individuals--I'm Nance, there's Daniel, there's Lauren--if we are Christians, we are not primarily individuals anymore. Our identity is fundamentally rooted in our being a member, a limb on the Body of Christ, the Church. "God has so composed the body... that there may be no division in the body, but that the members may have the same care for one another. If one member suffers, all suffer together; if one member is honored, all rejoice together" (1 Cor. 12:24-26). We are called to live like that because that reflects what we are. Of course we're going to suffer together with others--we're members of the same Body! Of course we're going to rejoice together--a member of our Body has been honored.
Of course sex is communal.
That's why Paul can say, in 1 Cor. 6:15, when calling believers to flee from sexual immorality: "Do you not know that your bodies are members of Christ? Shall I then take the members of Christ and make them members of a prostitute? Never!"
When a Christian commits sexual sin, they are involving the Body of Christ in sexual sin. He defiles his brothers and sisters; he defaces Jesus' Body. Paul doesn't call out believers for sexual sin just because he's a prude. Paul calls them out--and encourages others to do likewise--because he understands how the Body works. In sinning, the Christian involves the Body of Christ, the community, in sin. So... it's everyone's business.
This all goes against our sensibilities. Western culture rests firmly on individualistic philosophy. When you are baptized into the Body of Christ, you have to turn in the 'me' card. "Consider others more important than yourself"? "Bear one another's burdens"? Well... yes. Why? Because you are not your own (1 Cor. 6:19). It's disturbing, but simple.
Who knew what you were signing up for when you decided you wanted to be a member of a church?
No doubt, in many ways, Jesus calls to us as individuals. As Charles Williams once put it, "it is not merely a personal salvation, though naturally this great and universal thing can only be known through personal salvation".
We are called as individuals, but we are then transformed into members; we are incorporated into the Body.
And that last word--incorporation (related to the Latin word corpus, body!) is the last word. We read in the gospels that we are called to deny ourselves, and we get a sense of what Jesus means by it. In the Church we have the reality that Jesus was anticipating. The Church in Acts didn't share all of their possessions amongst each other because Socialism is the way to go. They did it because that is the nature of the Body. They did that because that is the reality of being a member of the Body.
This not only speaks to our financial ethics, but also, as we began with, our sexual ethics. The Church's teachings on sex aren't primarily supposed to be negative. 'Don't do this; don't cross that line; this is not allowed.' Instead, the Church's message about sex is meant to be a positive one: we are the Body of Christ and this is what the Body of Christ looks like. It's the place where sex is the wonderful thing that happens in marriage. It's the place where we sell our possessions to care for the needs of all. It's the place where we suffer and rejoice together, bear one another's burdens, consider others more important than ourselves.
This is the New Testament's beautiful affirmation. This is the reality of Christ's Church. It's also the story about our identities that we have to keep telling each other until we get it, we remember it, and we strive to live into it.
Posted by Nance at 10:44 AM

Email ThisBlogThis!Share to TwitterShare to FacebookShare to Pinterest
Labels: authors and books, sex, the church, theology

amen and amen! This idea echoes my thoughts on the nature of Jesus' example. We are not meant to become monastic toward powerful things like sexuality. We are called to engage in Jesus name and depend on him and the hands and feet he has put in our church to be holy amidst a crooked generation. And our generation is degenerating in this area rapidly and exponentially. So our answer is to tell kids to keep away from something so dangerous and when they encounter it, they are overwhelmed? We need to teach them how to fight, not just flee.

Your post reminded me of what Lewis said concerning human desires: they are often too weak, fixed on base things rather than satisfaction from the fullness of God.

It seems that often instead of being redirectied from a perversion of our desires, we get the Church answer to strangle them entirely.

Talking correctly about sex is a good thing. Who knows? Maybe Salt-n-Pepa were fans of Lewis too.

Your post reminded me of what Lewis said concerning human desires: they are often too weak, fixed on base things rather than satisfaction from the fullness of God.

It seems that often instead of being redirectied from a perversion of our desires, we get the Church answer to strangle them entirely.

Talking correctly about sex is a good thing. Who knows? Maybe Salt-n-Pepa were fans of Lewis too.

Along these same lines see Romans 12:5 - "we who are many are one body in Christ, and individually we are members one of another." Or as the NIV has it "each member belongs to all the others."

Hi, it's a very great blog.
I could tell how much efforts you've taken on it.
Keep doing!

Good call, Kevin. This sermon helps your point out. It's by Les Newsom, the RUF campus minister at Ole Miss. I think he would basically say that sexual gratification doesn't begin in the bedroom.