Myth and Reality in the Old Testament pt. 1

UPDATE: Dr. Edwards chimed in briefly in the comments; the publication date for this Bible is set for November of 2010. 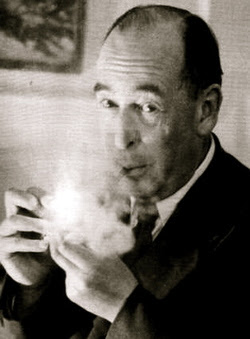 The C.S. Lewis Bible will offer C.S. Lewis as a companion to a reader’s daily meditation of scripture. As people read the Bible, they will also gain insight from his writings and spiritual journey as they invite Lewis into their spiritual discipline. This Bible will honor his material by showcasing his life-giving writings and classic works that define and explain key issues in the life of faith. This Bible will be more meditational than devotional, and would stay pure to his editorial voice to honor the material of this beloved writer and thinker.

Now... as a rule of thumb, I hate 'gimmick Bibles.' The Sailor's Bible, The Hunter's Bible, The Complete Personalized Promise Bible for Women, The Apologetics Study Bible, etc.

The Lewis Bible is going to be the NRSV. It first came to my attention when mentioned by Dr. Bruce L. Edwards (who is serving on the editorial team of Lewis scholars collaborating on the Bible ) on his blog.

It hasn't shown up on Amazon (or even Harper Collins's website, at this point), but I'll try to have more details as they've available.
Posted by Nance at 10:25 AM 3 comments:

Email ThisBlogThis!Share to TwitterShare to FacebookShare to Pinterest
Labels: authors and books, Lewis

I thought this was a fascinating article, and I'm certain that the questions about human dignity and social/familial issues that surround nursing home residence are questions that Christians need to give more attention and thought to.

Baptists and the Lord's Supper

In case you missed this over there, imonk recently published a response from Baptist scholar Dr. Timothy George to the question "How can Baptists respond to Catholic and Orthodox Christians who challenge our view of the Lord's Supper as having no deeper historical/Biblical roots than Zwingli?"
(Zwingli was a contemporary of Martin Luther, d. 1531.)

This is a pretty brief read, but definitely educational. Check it out.

My understanding is that Dr. George's answer to the question is basically: 'Baptists need to change their view... then they can worry about what others are saying.' He and I are absolutely on the same page here.
Posted by Nance at 4:19 PM No comments:

Email ThisBlogThis!Share to TwitterShare to FacebookShare to Pinterest
Labels: Baptists, other blogs, the church, theology

tanning beds in the news again

I don't like tanning beds.
A lot of people know this, and some girls I've known for a long time know it very well.

So I'm always pleased (for lack of a better term) when tanning makes the news--because it's generally bad news--like it has recently.

Visit msnbc.com for Breaking News, World News, and News about the Economy

I don't know much about the particular show--I've only seen about two reports from this dr.NANCY character. But I did do a little research on the doctor being interviewed, Dr. Jeanine Downie, and she seems to be legitimate.
The story unravels at the end of the video, as they descend into random tanning tips, but the facts discussed at the beginning are striking.

My question is this: in light of the apparent dangers of tanning beds, what sorts of restrictions ought to be placed on their use?
Posted by Nance at 10:50 AM No comments: