a change in the pro-life/pro-choice balance in US

For the first time since Gallup began asking this question 15 years ago, more Americans call themselves "pro-life" than "pro-choice".
Thanks be to God.
Continue to pray over this issue, that justice would be done, life pursued, and God glorified.
Posted by Nance at 1:41 AM No comments:

some reflections on Luther's On the Bondage of the Will

I just finished reading Martin Luther's treatise On the Bondage of the Will, written against Erasmus of Rotterdam and an earlier treatise of his.
This has been a really interesting experience for two reasons: 1) I now see what kind of a ... prick ... Luther was. My goodness. 2) I feel like my understanding of this debate has advanced quite a bit.
It seems as if all of the conversations I've had in the past about this issue have arisen from questions about the omnipotence of God. 'If God is really all-powerful, then how can we say that humans can ___.' Or maybe it will be omniscience one day. 'If God is omniscient, then can people really do ___, since he knew before that they'd...'
Surprisingly--to me, at least--these issues are not at heart of Luther's argument at all.

Therefore [in Romans 9-10], nothing is lacking in the Jews that is attributed to free choice, and yet nothing comes of it, or rather, the opposite comes of it. In the Gentiles there is nothing to be found of what is attributed to free choice, and the righteousness of God results. What is this but a confirmation by the... clearest possible testimony of Paul that grace is given freely to those without merits and the most undeserving, and all is not obtained by any efforts, endeavors, or works, whether small or great, even of the best and most virtuous of men, though they seek and pursue righteousness with burning zeal?

A passage like this one helps you realize that the issue for Luther isn't about the freedom of the will at, it's about the efficacy of the will. More than once late in the treatise Luther admits that those 'in the flesh' have the freedom to 'strive' and 'endeavor'. Ultimately that is just a peripheral issue for him, though. Sola gratia is the real topic.
Don't get me wrong: the term 'freedom of choice' is important throughout the work. I think the language of 'freedom' here is primarily supposed to be a part of the contrast Luther wants to draw between claims that men are free (i.e. able) to seek after God and the claims that men are under a perfect 'bondage to sin.'  Because of this bondage man can do nothing but sin, unless the grace of God intervenes.
There are of course deeper questions about freedom here as well. Luther definitely has a conception of men's only ever acting in accordance with God's will--but this has little to do with the image of a puppet master pulling strings, and much to do with God's having created all things and given all men individually the sorts of natures they have. Maybe the best description that he offers of how he understands God's 'compelling' people to act is at the end of his discussion of the hardening of Pharaoh's heart.

As things are... because [Pharaoh] is driven and carried along in his willing, though without any violence being done to his will, since it is not unwillingly compelled but is carried along by the natural operation of God to will naturally, in accordance with its character (which, however, is evil)--therefore it cannot help but fall foul of the word [of Moses] and be hardened.

This kind of 'willing' Luther will later describe as 'free', though he never does try to reconcile that description to the brief discussions of omnipotence and omniscience that he does have in the treatise. I'm okay with that... mainly because On the Bondage of the Will is already close to four-times the length of Erasmus's earlier work.

As I've been pondering all of this, the real disjuncts between the two main camps in the predestination-conversation and the integrations of these issues in their respective systems seem be becoming clearer and clearer.
The real disagreement between the Armenians and the Calvinists, I think, is over the way grace is offered to man. No orthodox Christian disagrees that "it's by grace you have been saved through faith", the question is over who is offered this grace and how.
The doctrine of limited atonement captures the spirit of the Calvinist response: only certain people are offered this grace and at particular times--these are the people for whom Jesus died.
The Armenian response in contrast revolves around that idea of prevenient grace, a grace that God ever pours on the world to check the passions of men and to prepare any and all men for the grace offered in Christ. Thus anyone, despite the bondage to sin, is able to seek God, though I believe even this seeking is only a response to the urgings of the Holy Spirit.
I agree with the Eastern Orthodox that limited atonement is a heresy and "completely contradicts scripture" (as David Bentley Hart put it in his brilliant little book on theodicy, The Doors of the Sea). Prevenient grace is still a difficult idea for me to get behind, as there seems to be no clear scriptural foundation for it--much like limited atonement in this sense--but instead it's just easily inferred from the whole tenor of scripture.
But there's still one other issue that Luther touches on and that must be addressed. This is issue of Creation: how God makes us, and, especially in light of evolutionary theory, what role does man play in his own creation?
Luther's suggestion that God puts in each man a nature that is capable of only one response to God, either receiving Him or scorning Him, while allowing for free will, still presents the same difficulties for those advocates of free choice that a more clearly-deterministic system would. In approaching this issue the realities behind Creation (again) must be addressed, as well as Romans 9, and this notion of prevenient grace.
I've only just begun to really consider all of this from this angle, so I'm not going to try and offer any answers here. Even if I had been pondering this for a long time, I have to wonder what good my 'answers' would be anyways.
What I can say is that Romans 9 is the most difficult chapter for me to understand in the whole of Scripture. It's not difficult to draw a meaning from it. It's difficult to place the apparent meaning in any kind of meaningful relation to the rest of the Bible. What Paul seems to be saying here simply does not seem to fit with everything else. How are we to reconcile this to the prophets, to the other NT authors, to the teachings of Christ in the synoptics?
I'm looking forward to spending much of my summer reflecting on all of this, as I spend some time really diving into Paul--especially Romans. On the one hand I feel as if I ought to expect answers to to these questions... but that may be asking too much. Luther's answer, I can say, is utterly unsatisfying. But beyond that sort of negative approach, I'm more and more inclined as the conversation goes on to say stop and just say with the Apostle: "Oh, the depth of the riches and wisdom and knowledge of God! How unsearchable are his judgments and how inscrutable are his ways! 'For who has known the mind of the Lord, or who has been his counselor?' 'Or who has given a gift to him that he might be repaid?' For from him and through him and to him are all things. To him be the glory forever. Amen."
Posted by Nance at 8:58 AM 3 comments:

Email ThisBlogThis!Share to TwitterShare to FacebookShare to Pinterest
Labels: authors and books, theology 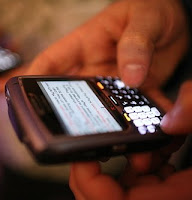 "If worship is about creating community, Twitter is an undeniably useful tool."
"He likes the way it helps him see what God is doing in other people's lives during the service."
These remarks come from an article in Time right now about a church integrating Twitter into their worship services... and the other churches hoping to follow suit. Read it.
The last line in the whole piece I think is telling. They are going over the sorts of emails this pastor has been receiving lately, and end with this: "Got any tips to persuade church leadership this is way cool?
...
That's a great question. How can we best pitch cool things to church leadership? If they can't be convinced, the whole congregation will miss out.
...
In all seriousness, while I think this desire to integrate 'cool' into worship is terrifying, there are other issues here which I find more frightening.
"Worship is about creating community"?
The dictionary seems to have missed the mark quite a bit on worship then: "the feeling or expression of reverence and adoration for a deity."
The scriptures, too. There, worship seems to be more about "ascribing to the Lord the glory due His name."
In a 'worship service' where the congregation is constantly looking at the comments of their neighbors in the pews and constantly looking to offer up their own comments, when will we say that we've crossed a line, and that the attention is no longer on God but on ourselves?
And what about this idea that Twitter builds community?
We who are one body because we partake of the one bread, participating in the body of Christ, are we to build community through micro-blogging. There are too many shallow relationships in a church already, without social networking removing us all yet another step from real people and real relationships. The development of a community in the early Church involved the selling of one's possessions and distribution amongst all, as there was need. I think that is quite the contrast.
Some questions have been raised lately about how the way the church presents to gospel shapes the message of the gospel (here Rob Bell interviews pastor Shane Hipps, author of Flickering Pixels: How Technology Shapes Your Faith, on this very topic). This is a situation where we need to consider these questions long and hard.
Again, here's the article. Go read it, and let's hear what you think.
Posted by Nance at 11:37 AM 3 comments:

Email ThisBlogThis!Share to TwitterShare to FacebookShare to Pinterest
Labels: the church, the news

if everyone would please remain calm

"Let's not lose track of the fact that the normal seasonal influenza is a huge public health problem that kills tens of thousands of people in the U.S. alone and hundreds of thousands around the world," said Dr. Christopher Olsen, a molecular virologist who studies swine flu at the University of Wisconsin School of Veterinary Medicine in Madison.

We, the masses in a society of mass media, need to learn the art of gaining perspective. Especially when the media outlets are able to select what they will and will not really make the public aware of.

Here's a nice article from the LA Times on the current 'swine flu' which makes the people walking around wearing masks look just a little sillier.
Posted by Nance at 1:28 PM No comments: