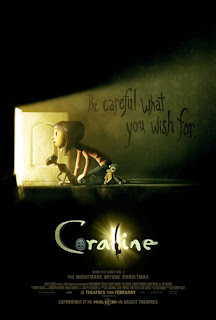 "Everything's right in this world," they tell Coraline. Of course, they have buttons for eyes.
Coraline is a kids's... fantasy... horror... adventure film. Or something like that. The movie's based on a children's book by Neil Gaiman, whom I best know from his novel American Gods. I've not read the book (though I may now), so I don't know how faithful an adaptation this film is, but I was left with the impression that it's pretty true to the original.
The movie takes us along with our heroine into two new worlds. When the film opens, Coraline's family is just moving into a dreary new home--the Pink Palace Apartments--and encountering some rather odd neighbors.  Inside this hundred-year-old apartment, the intrepid Coraline discovers a little door to new and very different 'other' world. This is a world almost identical to the real one, but fashioned around your every desire: your 'other parents' are more loving and present than the real ones ever have been; the food is always better; the neighbors are still strange, but endearing; the plants and animals are like critters out of a song in a Disney movie. It's also a place--the only drawback--where the people's eyes have been replaced with buttons.
And if you want to stay there, they're going to take your eyes too.
The eyes, of course, because Coraline is a tale about discernment: seeing and choosing. How will you use you eyes? Are you going to give your eyes over (literally) to a life of self-gratification, or will you keep your eyes for more real things, even if those things--those parents, those clothes, those meals--aren't as appealing as the 'others.'
Once Coraline makes her decision, she realizes that the 'other Mother' isn't as pleasant as she had seemed before, and Coraline suddenly understands her plight. ("Oh God." I really empathized with those two little words.) This is where the adventure part sort of takes off.
Before our heroine's epiphany, right in the midst of the button-other world's pitch to Coraline, as they try to hook her, we suddenly find the characters reciting Shakespeare: "What a piece of work is a man! how noble in reason! how infinite in faculty!.." They go on for some time, but they end this recitation before the speech's end. They stop short of Hamlet's "And yet, to me, what is this quintessence of dust?"
This is the question Coraline will eventually find herself asking. In the world where everything's right... nothing really is. The world that is home may be mundane, but it is home, and the good will come with the ill. Not everything about this button-world is wholly bad, but to give yourself to such an existence, rooted in pleasure and self... well, it will ultimately cost you more than your eyes (as the movie itself points out).
I thought that this was a really fascinating film, and I'm already planning on introducing (or the book) to my own kids some day. Of course it's still a kid's movie, but a fascinating kids movie.
It's a lot of fun too... especially if you see it in 3D like I did! I caught The Nightmare Before Christmas in 3D a few years back--which is actually the work of the same creative crew as Coraline--and while I think that one was a better pick for 3D, Coraline certainly didn't suffer from the extra dimension. (Watching through the glasses did kind of give me a headache for a while, but it passed.)
The animation is nice. It's a clay-mation-looking film, which I love, though I honestly couldn't tell you if it were really clay-mation, or a deceptive CG.
Also, I actually thought during the movie 'gee, Dakota Fanning's doing a good job,' so I guess that's worth note. There didn't seem to be much to do with the roll--and her performance wasn't astounding--but she did give a really solid performance.
I didn't notice the music at all until the credits... so it definitely falls short of Nightmare Before Christmas in that sense, but there's little shame in that.
The movie's not going to be for everybody, but if you like kid's movies, you like Gaiman, or you just want to take a nice break, go see it. You can certainly just sit back and enjoy an exciting and slightly-creepy story.
But if you do go see it, don't let the point slip by. We don't have to crawl through little doorways to reach a world where almost-boundless pleasure is at our fingertips. Yet that world is as slippery as Coraline's 'other world.' It's certainly not all bad... but it is also not all. If we lose sight of this, well, we stand to lose sight, and, once we've given so much of ourselves, we stand to lose much more.
The woman Folly is loud; she is seductive and knows nothing. She sits at the door of her house; she takes a seat on the highest places of the town, calling to those who pass by, who are going straight on their way, "Whoever is simple, let him turn in here!" And to him who lacks sense she says, "Stolen water is sweet, and bread eaten in secret is pleasant." But he does not know that the dead are there, that her guests are in the depths of Sheol.

It reminds me of a verse that talks about the eyes being a window to the soul...hmmm... it seems interesting, I hadn't really considered going to see it, but I think I may want to now?!?

Ok. Went to see it. Very good! It was different than I thought it would be but good all the same.