"Human depravity, then, has broken into fragments that which is by nature one and simple; men try to grasp part of a thing which has no parts and so get neither the part, which does not exist, nor the whole, which they do not seek."
"How is this?" I asked.
". . . the man who seeks only power wastes his money, scorns pleasures and honors that carry with them no power, and thinks nothing of fame. But see how much he is missing: sometimes he is without the necessities of life, he is plagued by anxieties, and when he cannot overcome them he loses that which he wants most--he ceases to be powerful. Honors, fame, and pleasure can be shown to be equally defective; for each is connected with the others, and whoever seeks one without the others cannot get even the one he wants."
"What happens when someone tries to get them all at the same time?" I asked.
"He, indeed, reaches for the height of happiness, but can he find it in these things which, as I have shown, cannot deliver what they promise?"
"Of course not," I said.
"Happiness, then, is by no means to be sought in these things which are commonly thought to offer the parts of what is sought for." 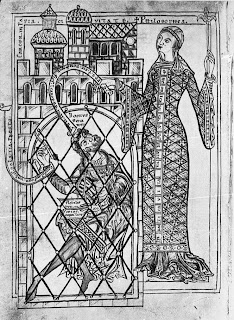 Boethius was a Christian theologian and philosopher in the late 5th, early 6th century. His works, including some translations of Aristotle into Latin, are thought by many to mark the end of the Classical Age and the beginning of the Medieval period. Among his theological works are a treatise on the Trinity and polemics against Arian thought--the latter may have been one impetus for his execution under an Arian emperor.
While in prison, Boethius composed his most enduring work, The Consolation of Philosophy, wherein Boethius is visited in prison by Lady Philosophy, with whom he discusses various topics, from material 'goods' to free will. Interestingly, this is accomplished without the use of Christian language, but instead uses only the diction of Classical philosophy. This trend (which by no means begins with Boethius) will prove abiding in Christian discourse--consider the Catholic doctrine of  transubstantiation or the discussions of God and determinism which exclusively use extra-Biblical terminology like 'omnipotent.' This may be a troublesome tendency, but still, as Charles Williams said of the Consolation itself, "though it is not formally Christian, it is Christ." Ultimately, this book fits well into the tradition of great Christian works coming from prison, from Paul to Ignatius to St. Thomas More to Bonhoeffer.
Lady Philosophy's teachings on different 'goods' that people seek (the quote above is just a fraction of that discussion) was on the one hand meant to console the saint awaiting his execution, but on the other hand it is a wonderful transposition of some of the teachings of Christ in the Sermon on the Mount into the cant of Hellenistic philosophy. In place of Christ's characteristic "do not lay up for yourselves treasures on earth, where moth and rust destroy and where thieves break in and steal", Boethius delineates for his readers how goodness is but one thing, why exactly other things that are called good cannot truly be so.
The last quarter of the Consolation deals with the issue of free will and with God's omniscience. This discussion by itself makes the text worth reading. Here again the issue of translating Christian realities into Greek philosophical jargon is raised, though here it is raised in the text by Lady Philosophy herself. Boethius recognized the inherit dilemma of applying this philosophical diction to revealed truths--the necessary limits of this sort of language--and this recognition for him offers a clear answer to the disturbing question of determinism.
I've frequently sold the Consolation of Philosophy as the second greatest book in existence, after the anthology that is the Bible. That being said... go read it. Go encounter Boethius. He was able to--just as Christ urged John the Baptist to--perceive the realities of God and His work, which prison and impending death can obscure if they are allowed to found our judgment in those dark times.

And which of you by being anxious can add a single hour to his span of life? And why are you anxious about clothing? Consider the lilies of the field, how they grow: they neither toil nor spin, yet I tell you, even Solomon in all his glory was not arrayed like one of these. But if God so clothes the grass of the field, which today is alive and tomorrow is thrown into the oven, will he not much more clothe you, O you of little faith? Therefore do not be anxious, saying 'What shall we eat?' or 'What shall we drink?' or 'What shall we wear?' For the Gentiles seek after all these things, and your heavenly Father knows that you need them all. But seek first the kingdom of God and his righteousness, and all these things will be added to you.

Email ThisBlogThis!Share to TwitterShare to FacebookShare to Pinterest
Labels: authors and books, quotes, the cloud of witnesses