A Wal-Mart employee in New York was trampled to death by shoppers on Black Friday.
Read it all.

Email ThisBlogThis!Share to TwitterShare to FacebookShare to Pinterest
Labels: the news

A Psalm for Giving Thanks

Make a joyful noise to the LORD, all the earth!
Serve the LORD with gladness!
Come into his presence with singing!

Know that the LORD, he is God!
It is he who made us, and not we ourselves;
we are his people, and the sheep of his pasture.

Enter his gates with thanksgiving,
and his courts with praise!
Give thanks to him; bless his name!

For the LORD is good;
his steadfast love endures forever,
and his faithfulness to all generations.
Posted by Nance at 11:41 AM No comments:

Email ThisBlogThis!Share to TwitterShare to FacebookShare to Pinterest
Labels: scripture

And this is your opinion of me!

As I was driving away, I realized what the barrage of falsehoods written on slick signboards reminded me of. It was the telescreens in “1984.”

The New York Times journalist George Packer wrote this after a visit to the Creation Museum in Petersburg, Kentucky. If you've read 1984, this impression ought to disturb you.

I've spelled out before my thoughts on how Genesis's creation account should be read; no reason to revisit that.
What has been on my mind for the last few weeks hasn't been a question of interpretation, but rather a sickness over what the world is left to think of the church. Voltaire made a mockery of Leibniz's claim to the "best of all possible worlds"... thankfully his wit was oblivious to the findings of modern science. The attacks today may be less ardently crafted, but they're no less well-founded on the sciences than Voltaire's were on experience, and the Church--even those parts which would have nothing to do with young-Earth creationism--is left defenseless on the receiving end.
Don't suppose that this is just the stance of the 'new atheists'. Matt Damon recently brought up this very issue concerning Sarah Palin "because she's gonna have the nuclear codes, you know." Isaac Asimov famously called believers "ignorant people, the most uneducated, the most unimaginative, the most unthinking among us", at least those who "are not ashamed to ignore, totally, all the patient findings of thinking minds through all the centuries since the Bible was written." I understand that my own home state of Louisiana is the laughing stock of the scientific community, as we passed the Louisiana Science Education Act, which many view as a backdoor for creationism to come into the classroom by. This attitude isn't uncommon.

And this is exactly what St. Augustine was talking about when he warned of "people outside of the household of the faith" beginning to

think our sacred writers held such opinions, and, to the great loss of those for whose salvation we toil, the writers of our Scripture are criticized and rejected as unlearned men. If they find a Christian mistaken in a field which they themselves know well and hear him maintaining his foolish opinions about our books, how are they going to believe those books in matters concerning the resurrection of the dead, the hope of eternal life, and the kingdom of heaven, when they think their pages are full of falsehoods on facts which they themselves have learnt from experience and the light of reason?

This issue is a blight on evangelism. Just as Augustine warned, many people are now content to think "the writers of our Scripture. . . unlearned men." We, the believers of the 21st century, are but those "unthinking" enough to follow texts written thousands of years ago... by "unlearned men."
How indeed can we share the truths about the resurrection, the hope of eternal life, and the Kingdom of Heaven when the world is convinced that Christians are so uneducated, unthinking?
I'm convinced that Evangelicalism's vehement attachment to 'Creation-as-science' is eroding all of our hopes of 'making disciples of all the nations.' When the minds of those outside the household of the faith begin to associate the Church with Orwell's Party, we've been totally divorced from truth in those minds.

Now I will be the last person to suggest that we simply forego any scriptural teachings which the world finds distasteful: I'd much rather see the true nature of the faith perfectly evident to all. 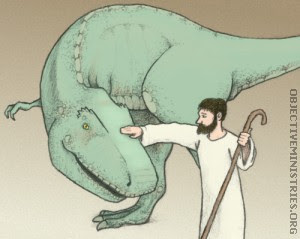 ... but unnecessary and irrational interpretations of scripture are another issue.

What I'm suggesting is simply that we seek a wisdom from above that is "open to reason" (James 3:17), and that we never allow a questionable interpretation of scripture, one which is totally adverse to the findings of scientific inquiry, hinder our mission in the world, all because we are unwilling to hear alternatives.
After all, scripture is our most perfect revelation of God: let a man be repelled if he dislikes the true character of God that it presents, but don't repel him by man-made interpretations of that perfect revelation.
It is precisely when we begin to force God's Word to speak in a particular way on this issue that many begin to reject our faith and, along with it, the eternal grace and love of Christ.
This must not be.
Posted by Nance at 10:31 PM 1 comment: