a conversation with artist Jim Lamb

While there are newer editions of Charles Williams's novels around today, every time I purchase one myself, it is one of the Eerdmans editions from the early 80s. Why? One simple reason: the cover art. Despite the difficulty of these books--that the action in them is largely psychological, spiritual, ontological--I've long felt that the cover designs for these editions really well capture the spirit of the works (at least with those that I've read). This is really impressive to me, and these cover images have really added to the reading experience for me. Recently, because of the wonders of the internet, I was able to track down the artist behind these works, Jim Lamb, and Mr. Lamb was gracious enough to share with me a bit on his experience creating these images.
(In case you're unfamiliar with everything that I'm talking about, I've tacked a few of these book covers onto the end of the post.)

Thanks for the nice compliments about my work.

I am, indeed, the artist for those covers. It was a long time ago, but nice to know some people out there have noticed them and appreciate them.
They were created through commission by Eerdmans Publishing in 1980 when I was working as a young free-lance illustrator in Southern California.
Each book was a great challenge, because, as you know, the metaphysical nature of Williams' writings leave a lot of room for interpretation and certainly, creative imagination for the artist.
I did not completely read every one of the novels, but I did read large portions of all, and all of several of them. There were key areas in each novel that seemed to summarize the overall intent and direction of each, and I tried to tap into those themes and interpret them as best as I could visually. Since there were verbal montages presented, I decided that visual montages would best suggest each work.

I posed as the central figure model for the image on Shadows of Ecstasy, and my future wife's face was the model for the image on Many Dimensions. It wasn't for ego reasons, but in those days I couldn't afford models, so I often found the cheapest models around, and that sometimes ended up being me or friends and family who would cooperate with the process. I did the same thing when I designed several US Postal Stamps as well, but changed the faces enough so they weren't likenesses of the people.
The Williams novels were a fun and challenging project, and I still take pride in those images. I felt they very adequately represented Williams' written creations.

If you'd like to see any more of Jim Lamb's work, though of a different nature, check out Jim Lamb Studio. 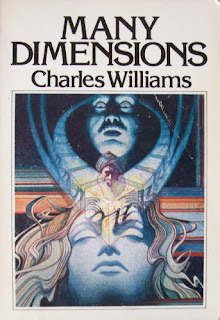 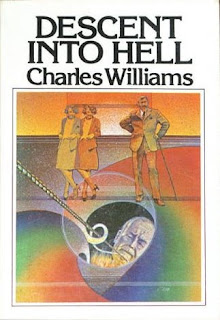 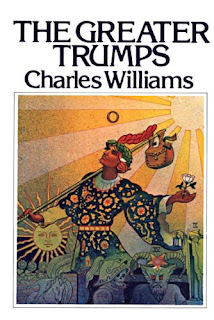 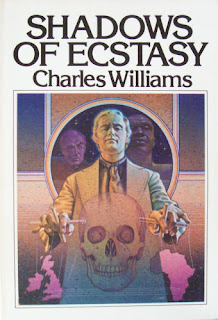 We actually had a brief discussion about this in Henderson's class when we were reading Descent into Hell. No one liked the new cover art, and those with the original editions were hailed as lords over all the classroom. Or something like that. My memory's fuzzy.

dude, i do agree with you on this one.
Sadly, as you know and have probably pointed out, my 3-volume edition has none of Mr. Lamb's art; the cover and spine feature a sort of cartoonish/clip art Holy Grail with lightning all about it (from War in Heaven, one of the three novels included in the volume). This is cool so far as it goes, but the older art really captures something I think.

Considine (Shadows of Ecstasy) was a middle-aged man, so if Jim Lamb was a "young illustrator" then he made himself look older? If so he did a quite remarkable job. I ordered the box set of the CW novels used off of amazon just so I could have the Jim Lamb covers, half of which I'd never seen before. (I also appreciate his All Hallows' Eve cover the more--his painting of a painting that existed only in CW's mind's eye.)

Have admired these online for years, as someone who's only read Williams on an ereader, but only found my first one in a bookstore the other day—"Place of the Lion." Once I had it in hand I googled his name and found your post. Thanks for getting in touch with him all these years ago—it was good to hear more about his art.