a quote from Cicero 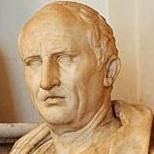 Anyone whose face is immortalized in a bust like so must be authoritative.

If it were possible to constitute right simply by the commands of the people, by the decrees of princes, by the adjudications of magistrates, then all that would be necessary in order to make robbery, adultery, or the falsification of wills right and just would be a vote of the multitude.

He continued to say that "the nature of things" is not thus subject to "the opinions and behests of the foolish."*

The more you think about this, the more relevant you'll find it to be. I am personally reminded immediately of abortion.
The concept of "higher law" that Cicero is here referencing, the measuring stick by which human laws may be called "right" or not, is one of the deepest roots in American legal thought ("endowed by their Creator"), and reflects a particular form of that understood, philosophical "good" that I recently explored in another post.

-
*the quotations came to me in the form of Edward S. Corwin's essay The "Higher Law" Background of American Constitutional Law, wherein Corwin culls the brilliance of the classical thinkers concerning this "higher law".
Posted by Nance at 1:07 PM

Email ThisBlogThis!Share to TwitterShare to FacebookShare to Pinterest
Labels: quotes, the classics, war and politics

even a pagan like Cicero (one of the 'illustrious heathen' they used to say) knows that the very existence of laws implies moral absolutes and that it is foolishness to assume that "market forces" or "democracy" can be used in determining what is right or just (though this seems to be what is happening in our midst). The good news here is that the fact that Cicero addresses this at all demonstrates that this is not a new problem. Probably human civilization has lived with this tension forever - especially at those moments when the pendulum seems swung far in one direction or the other (the problems of medieval Christendom before the Enlightenment might be an example of the "other side" of the pendulum from where we are now - or in fact Sharia Law Civilizations might be there now...)