A Wonderful Life versus Your Best Life

A few weeks ago I had a dream that saw Joel Osteen releasing a new book entitled World Without You. It was basically a rip-off of one of the finest films ever made: It's a Wonderful Life The book went on to show, essentially, how crappy existence would be without you, the reader, because you're so awesome. Considering it now, I'm not quite sure how the book would have related to individual readers; perhaps it was a sort of Choose-Your-Own-Adventure format. One can only speculate.
Regardless, I realized that morning how much this thinking was similar between Capra and Osteen, and began equating the two, where Capra would be the man I went to if I were in the mood for an Osteenian message.

Two nights ago I watched It's a Wonderful Life, for the first time in a year or so.
Frank Capra, I apologize. Jimmy Stewart, I'm so sorry. LORD, forgive me for this falsehood.
In reviewing, I see that the classic film is, in fact, infinitely more Christian in its message than anything of Osteen's I've ever encountered. 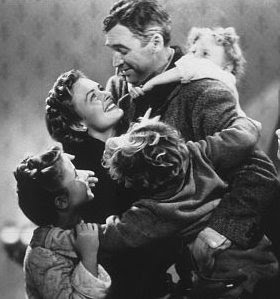 If you've not seen the film, you should stop here. Appreciating this movie will be more edifying than reading what I have to say of it. If you have seen the movie, then you can watch it again here, in 30 seconds, performed by bunnies.

Where I erred.
While Wonderful Life does speak volumes about the character and blessings of George Bailey(the late, great Jimmy Stewart), the message is fundatmentally different from that presented by Osteen.
Perhaps an illustration would make this rift most apparent. Let's imagine Joel Osteen having to walk around in George Bailey's shoes.
When his brother Harry returns from school, married, what does Joel do? He recognizes the blessing from God that he can now get out of the little town that's been hindering his dreams his whole life, and he leaves Bedford Falls behind to go grab hold of all the blessings out there for him.
When he and Mary are wed, he thanks God for the huge blessing of the $2000 dollars that they have, and goes on the extravagant honey moon that they'd planned, and that he had always dreamed of. The time had come for him to take hold of that dream, and nothing was going to keep him down.
When Potter offers him the job starting at $20,000 a year(nearly 10 times what George was making before), he would acknowledge the blessing of the good Lord that was before him and then, with a big smile on his face, graciously accept. There would be nothing now to keep this George Bailey from seeing the world, buying his wife and children all the nicest things, and maybe even still being philanthropic with some of his excess. This was his chance.
When Joel's done living his Best Life in Bedford Falls, I'm afraid that we're just left with Pottersville, not unlike the city we find when George is given the chance to see a world where he was never even born.

Instead, of course, the story goes quite differently. George sticks it out with the Building & Loan to let Harry pursue a career. He uses his honey moon cash to help alleviate the financial crisis that strikes. He turns Potter down cold for the good of the little town.

George is still presented as blessed, no doubt, by his family and his position in the town--a position that is characterized by his own personal hardship and sacrifices, as well as by his boundless altruism.
George Bailey is the man he is because he lives for others. If you had to summarize his life in one word, selfless would work as well as any.

This is that basic rift between Osteen and George Bailey. The one wants you to live the best life available to you... best being relative to your own well-being and comfort. The other lives the life that is best in relation to everyone else. Selfless.

And while George Bailey could be a fine icon for anyone with any sense of morality, Atheist or Christian, what can we really say about Osteen's message? It's all about the reader, the hearer. Your best life. It's selfish. Plain and simple. And since when has the gospel message ever been selfish?
Try to tell Paul that God wanted him to live his best life, where he was most comfortable and well-off. That's a lie from Hell. Of course it sounds so good and of course it makes so much sense when you throw around phrases like "God is good" without thinking things through. Regardless, it's simply not true. Jesus did not tell the rich young ruler to go buy that beautiful piece of property that he'd always hoped for. He said sell all that you have, give it to the poor, and follow me. Christians are to be those people who are pouring their lives out in loving service, to God and to their neighbors.
This is the Christian life.
It's best insofar as it is like God, the God who left heaven to be incarnate in human form and die for others. That's the wonderful life that God has before us. It defies our natural inclinations and desires, but is the life of love and selflessness, the life of relativity to God, that we were made for.

So, again, to all those involved with this classic, beauty of a film, I apologize. Even in its most secular moments, this story is more in line with the teachings of Christ than anything from the "ministry" of Mr. Osteen, and perhaps, at least in this season when everyone talks about love and giving, we, despite all that our society says, may live lives that more truly reflect this selfless love and work that Christ has called us to.
Posted by Nance at 8:25 PM