As it turns out, Enchanted is the Three Amigos or Galaxy Quest of Disney movies... and those of you who know me personally know that this is high praise.

For those who need a plot synopsis: a very generic Disney princess named Giselle(Amy Adams) is taken from her picture-perfect, fairy-tale world just before she can marry her very generic Disney prince, Edward(James Marsden, and phenomenal), and is deposited into the land where there are "no happily ever-afters", i.e. in reality, more particularly in New York City. There she happens into a different kind of prince charming, Patrick Dempsy(the character's name is... forgettable), while Edward follows after, to rescue his "true love". Susan Saradon and Idina Menzel are also along for the ride, the former as the obligatory wicked witch/step-mother, and the latter, unfortunately, not singing a note. 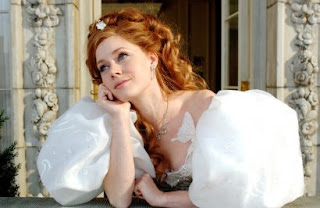 So what makes this movie so good? Its fore-runners in Disney's filmography, that's what. The innocence and singing and drama and wardrobes and side-kciks of all the Disney princess-flicks, we find out, are not really meant to leave the animated world. And yet, here they do.
While Disney has managed to create this brilliant, over-the-top satire of their own classics--every gag rings of Snow White, Cinderella, or Sleeping Beauty--what separates it from Shrek is that Enchanted still feels like a Disney fairy tale in its own right, whereas the other's story is not so strong as its comic allusions. This is also, I think, just vastly superior to all the live-action Disney flicks that have dominated recent years.
Interestingly, for all the talk in the film about there being no happy endings in reality, it seems that Disney simply can't affirm that sort of concept, perhaps for business reasons. While we do see the world start to have its effect on Gizelle and some of the others, the opposite effect is much more prominent. The princess's mere presence seems enough to prevent some of the sad realities of our world. So while in the film Dempsy is trying to keep his daughter firmly planted in the real world, Gizelle subverts all his strivings on that front with little apparent effort. She's like a Jane Bennet who has the ability to conform everything to her own view of it, and the Disney happily ever afters that Dempsy was trying to put down now find an unlikely home in New York. I suppose if one wanted a movie that actually conveyed the difficulties of life well, they'd have to throw Enchanted into a blinder with some film of Martin Scorsese's.
In closing this short review, all I can say is if you're a fan(I happen to be) of the animated Disney-verse, from the oldies on down to The Little Mermaid or Beauty and the Beast, then you certainly won't regret stepping into this wonderful fairy-tale "reailty" that is Enchanted.
This movie is well-done, fun, smart, and hilarious. Just go see it.
Posted by Nance at 10:55 PM