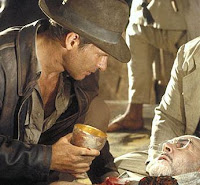 I recently watched again the brilliant Indiana Jones and the Last Crusade, a film which proves that George Lucas didn't lose his mind until the early 90s.

Last Crusade is arguably the best of the Indiana Jones trilogy(soon to be quadrilogy), but I'm not hear to simply sing the film's praise, though it would be an easy course to pursue. Rather, I want to reflect on the spiritual themes of the film, particularly on its portrayal of faith.


There are all sorts of beautiful images in the film, but of course the parts that we all remembers so well, and the parts that I want to explore here, come from the film's climax. [Warning: if for some reason you do not know how Last Crusade ends, then you may want to stop here]
The story can be summarized as such: Indiana is forced to retrieve the Holy Grail from its resting place for the Nazis because it is the only hope of saving his father who has been shot. The arrogant Nazi stooge, having shot Henry Jones exclaims: "The healing power of the Grail is the only thing that can save your father now. It's time to ask yourself what you believe." Indy then faces three tests that lie between himself and the Grail: the Breath of God, the Word of God, and the Path of God. The first two he manages to pass by using his head, his education, and a keen sense for when it is appropriate to roll. The third task, however, is different. Indy comes to a cliff face, facing an abyss at least thirty feet wide between himself and the end of the path, with the instruction to leap. He mutters, resignedly, (after "no one could jump this!") that it is a leap of faith.


And so Indiana Jones has an interesting choice before him. His wits, his experience, and his knowledge can no longer help him. He has instead a hole too wide to jump, a determination to save his father (a father who has dedicated his life to the search for the grail), and an illustration of the worthy Grail-quester simply walking across this gorge on thin air. And Indy has to act.


So what is Indiana Jones teaching us about faith?
1) The decision based on faith simply cannot be made to stand on anything else. A good vocabulary or a mastery of Latin will aid him little here. He is given an act that seems impossible by all practical measures, and an assurance that it can be done.


2) Faith doesn't make sense. Apparently impossible, yet assuredly possible. This fits well with Kierkegaard's definition of faith in Fear and Trembling (which is, appropriately, an examination of the Binding of Isaac): faith is a complete resolution to something, while completely trusting that it is not so. In other words, it is a paradox. When something is given to you on authority (here, the authority of the Grail legend and the research of his father), yet seems wholly contrary your experience, it can only be accepted (if this is truly acceptance, and not merely some kind of passive acquiescence) by means of faith.


3) Faith is, nevertheless, still to be trusted (at least at times). It is not trustworthy in the sense of "see? there really is good evidence for this!", but simply leads--and is the only thing that would lead--to the correct conclusion. Indy didn't discover the solid ground across the chasm until he had already trusted in it and committed to it.


So Indiana Jones and the Last Crusade, in a nutshell, leaves us with this description of faith: unavoidable (for certain decisions to be made), paradoxical, and reliable.
These are attributes that I'm willing to concede for faith in reality. This is going to be what you get at times with faith. When all evidencial means are exhausted, some conclusions can only be made on faith. Having faith in things doesn't quite make sense, epistemically. Faith, however, oftentimes will lead to good decisions. For example: any appeal to authority is an action of faith; while you have not done the research out in the trenches yourself, you trust the expert to know the facts unseen by you, and present them to you untampered-with. This will sometimes be a poor decision, but often enough(in most non-fiction books we read and most classes we take) be safe.


Yet these lessons, brought to us so well by Harrison Ford and Steven Spielberg, highlight exactly the problems that so many seem to have with faith.
St. Thomas summed this up well in an Objection in his Summa Theologica(I, Q. 2):

Italics added. Of course Aquinas goes on to reply to this objection, but that is not here my concern. He has highlighted the problem that LC brings to light also: "faith" insinuates a thing that cannot be known by scientific knowledge. Our culture today sees scientific knowledge as the highest (or perhaps the only) way to know things. Obviously, in this context, faith will be problematic.
Regardless of how well-founded one's faith may be, faith as defined in scripture ("Now faith is the assurance of things hoped for, the conviction of things not seen", Heb. 11:1) will always come back to this difficulty.


So what is to be done? Much.
We have to decide how we'll perceive reality, strictly by means of scientific observation, or utilizing other modes as well (Eric Voegelin's idea of equivalences sounds like an interesting consideration here)? Will we accept that Christian arguements are only truly forceful when approached by the believer, as I'm told Pascal himself said of his own works? Will we trust probabilities when the intellectual standard of the day insists (perhaps unreasonably) on certainty?


For a short conclusion I would make one suggestion. I do not believe that impirical data from observation is the only kind of knowledge to be had. I do believe that faith can be reasonable, with the right foundation. So, what I feel one must do is examine the evidence that Christianity purports, from both philosophy and history. After that, it may simply be as Charles Williams put it, that "no one can possibly do more than decide what to believe." Meanwhile, we who are believers must continue to trust our Lord to give all the grace to take that leap from the lion's head and believe.
Posted by Nance at 2:04 AM