One of the largest Episcopal congregations in the nation is leaving the national Episcopal church following the results of the church's national convention last week.
Christ Church Episcopal in Plano, TX released a statement approved by church leaders stating the following:

The mission of Christ Church is to make disciples and teach them to obey the commands of Christ. The direction of the leadership of the Episcopal Church is different and we regret their departure from biblical truth and the historic faith of the Anglican Communion. ... We declare our intention to disassociate from ECUSA as soon as possible.

ChristianityToday.com has also reported on this, pointing out that Christ Church Episcopal is larger than the entire diocese from which the new Episcopal church presiding bishop came.
Christ Church's pastor, Rev. David Roseberry, was a firm opponent of the consecration of Rev. Gene Robinson in New Hampshire in 2003, and has since frequently criticized the church's national leadership.

The Episcopal Church in America continues to slip

Katharine Jefferts Schori was elected Sunday to lead the American Episcopalian Church, and conservatives are mad. Why? For one, the fact that she is a woman. Three of the dioceses in America still do not ordain female priests because they believe it to be contrary to scripture, much less a female bishop. But wait until those diocese hear her take on homosexuality.

Schori allows the blessing of same-sex unions in her small desert diocese. After the national church recognized gay unions as part of its "common life" in 2003, Schori's diocese said it would "support relationships of mutuality and fidelity … between those persons for whom the celebration and blessing of a marriage is not available."

Did someone mention the phrase 'contrary to scripture'? CT's report also points out Schori's support of the consecration of openly-gay bishop Robinson in New Hampshire back in 2003.
As if relations between the American Anglican Community and those in, say, Great Britain, needed further strain, well here here it is.
We need to pray for the Episcopal church, that they might have direction, or rather acknowledge that direction already given them by the LORD, unity, and for those standing fast to the scripture, integrity, that they may continue to oppose the subverting of this body by unsound teachings and sin.

For more on this election, see this article.

the next NOOMA is out there

013 Rich is out, and you may have no clue what I'm talking about.

Rob Bell, author of the popular book Velvet Elvis, has been really making his mark in the mainstream youth/college ministry world over the last fews years with his phenomenal NOOMA ministry. These short(usually 10-12 minutes) video messages are described by nooma.com as follows:

We can get anything we want, from anywhere in the world,
whenever we want it. That's how it is and that's how we want
it to be. Still, our lives aren't any different than other
generations before us. Our time is.

We want spiritual direction, but it has to be real for us
and available when we need it. We want a new format for
getting Christian perspectives.

NOOMA is the new format.

It's short films with communicators that really speak to us.
Compact, portable, and concise. Each NOOMA touches on
issues that we care about, that we want to talk about,
and it comes in a way that fits our world.
It's a format that's there for us when we need it,
as we need it, how we need it.

I've made a passing reference to one of Bell's videos before on here, but I wanted to take a chance and really spotlight this ministry, because it's something I support. If you want to learn more about this ministry, Rob Bell, or the individual NOOMA videos, check out NOOMA.
For a look at the newest video, Rich, released this month, you can check this link. 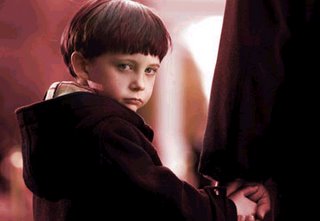 Anyone's whose been watching TV or been to see a film lately knows that this Tuesday--appropriately, June 6th, or 6-6-06--sees the release of the remake of the classic Gregory Peck meets the Anti-Christ horror flick, The Omen.
By all the commercials I've seen thus far, this film looks pretty good and really freaky. And of course it will have a heavy spiritual connotation, given the plot material.
Now, in a really awesome move, I think, Christianity Today has done an interview with the film's director, John Moore, for more(no pun intended) on this upcoming quasi-religious-horror-thriller monster that he's created. They talk a bit about the original, about Moore's own beliefs, and a few other interesting topics are brought up as well. Check it out.