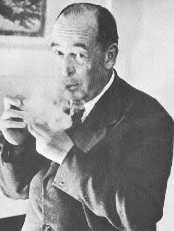 Lewis is one of my favorite authors of all time, if not my single favorite, so I've decided that he'd be a great man to quote on this page when I have little original thought of my own to post. Unfortunately this appears to be a common predicament that I find myself in, so if we're lucky, we'll find Jack's quotes on here fairly often.

A man who makes his golf or his motor-bicycle the centre of his life, or a woman who devotes all her thoughts to clothes or bridge or her dog, is being just as 'intemperate' as someone who gets drunk every evening. Of course, it does not show on the outside so easily: bridge-mania or golf-mania do not make you fall down in the middle of the road. But God is not deceived by externals.

From No Perfect People Allowed

I thought I'd offfer an interesting quote on Christians and tolerance from John Burke(pastor of Gateway Community Church in Austin, Texas)'s book on "how do we live out the message of Jesus in today's ever-changing culture?"

The way we must navigate these cultural shallows comes from understanding that in a postmodern culture, the messenger is the message. How we are perceived is every bit as important as the truths we espouse. What they see is what they get. The attitude of the church culture will either convey the person of Christ and his attitude, which was outrageously accepting of and attractive to the "sinners" of his day, or our attitudes toward others will reinforce a stereotype that does a disservice to Jesus.

Email ThisBlogThis!Share to TwitterShare to FacebookShare to Pinterest
Labels: authors and books

I knew it.
They're like cigarettes, except they make you 'prettier' instead of 'cooler'. And they come in bigger packages with shiney lights.

Email ThisBlogThis!Share to TwitterShare to FacebookShare to Pinterest
Labels: health

I can't believe I'm writing this...
For a movie whose tagline is Everybody has a secret... Duke wants Olivia who likes Sebastian who is really Viola whose brother is dating Monique so she hates Olivia who's with Duke to make Sebastian jealous who is really Viola who's crushing on Duke who thinks she's a guy..., this was surprisingly good.
What we have here: 1) a chick flick, in the high school sense of the phrase, 2) a film all about impersonating the opposite sex(think Mrs. Doubtfire for teenagers), and 3) an unexpectedly funny movie. This is the story of Viola, who can't play soccer at her school because the girl's team was sacked and she's not allowed to play for the guy's team. Obvious solution? Impersonate her twin brother attending a rival school and trying out for that guy's team(not just for the girl's for some reason) to get payback at her old school. Complications of course follow, anything from having the 'hottest' girl in school liking her(him?) and you having a thing for your roommate, to, again, very Mrs. Doubtfire, having to play both of your selves at one event simultaneously.
David Cross is hilarious as the school's principal, and Vinnie Jones(the upcoming X-Men 3's Juggernaut) is a terribly frightening Australian soccer coach--also a fun character. The writer's a thought did a great job with most of the gags, and I guess Amanda Bynes deserves some credit to for a job well done, and if I may say so, she made an eerily convincing male. Good to see that someone for Nickelodeon's All That is amounting to something now.
There's a bit of language, and some things that I'm not sure are appropriate for younger kids, but as far as PG-13 goes, this film's pretty tame, and again, surprisingly good. Even the guys should appreciate it.