It seems like the church spends more time raising havoc over issues than it does on the fulfilling of the Great Commission(Matthew 28:16-20), the living-out of the two greatest commandments(Matt. 22: 37-40), or the seeking of pure and undefiled religion(James 1:27). News of 'the church' opposing this or that, boycotting something or other, and speaking out against things is more frequent and seemingly more important than that of it seeing people redeemed by the blood of Christ Jesus and living lives in submission to His will.
This is kind of annoying.
Christ didn't establish an earthly ministry that it could be influential on society's media or politics, but that it would bring people to the knowledge of Him. When folks are focused on Christ, the other things will fall into place. Yet we spend our time condemning lifestyles, books, and films. Instead of presenting people with the love of Christ, we condemn them for their sin(no more deplorable in the eyes of God than the sin in our owns lives, less even, perhaps).
But it is really the reaction to entertainment and media which I want to dwell on for a minute. There was a time when the church disapproved of the writing of fiction simply on account of it's not being entirely true. Before that was a time when the church disapproved of the publication of the Bible in any language that the people could actually read. Today we seek more 'evil' things to censor. One example that makes me just as angry as any example would is Harry Potter. I've never in the years that these books(and later, films) have been popular given my opinion of them to anyone, because I had not read them for myself. Now, just lately, I've seen four movies and read one book, being in the second one currently. So I can offer an opinion now. These people don't know what they're talking about. Banning J.K. Rowling's books on account of the use of magic by the characters in no different from banning anything that features a murder or a lie. Magic is frequent in Tolkien's Middle-Earth epics The Hobbit and The Lord of the Rings, as well as in Lewis's Chronicles of Narnia. Should we thus ban these, works which present truths of God better than many other pieces of literature ever made? Or perhaps it isn't the magic at all, but rather the emphasis on love, friendship, and good vs. evil which we must censor. Oh wait... that doesn't make sense at all.
What the 'Christian literary critics' who apparently must exist need more than anything else are people with open minds willing to read a work and form an opinion on it. That is the point of free will: thinking for ourselves, as opposed to letting someone or something else feed us our 'opinions'.
And what the church needs more than anything else is people who would rather be disciples of Christ than 'Christian literary critics'.
Christ's calling on us isn't to preach with shaking of fingers, but rather, trembling, pointing to Jesus Christ on the cross and saying to the lost world 'you can be clean now'. There's no need to have Christian expectations of the world until after we've converted them.
I'll leave you with that, and with these lyrics of a new song of Todd Agnew's called "My Jesus"

Cause my Jesus bled and died
He spent His time with thieves and the least of these
He loved the poor and accosted the comfortable
So which one do you want to be?

Cause my Jesus would never be accepted in my church
The blood and dirt on His feet would stain the carpet
But He reaches for the hurting and despised the proud
I think He'd prefer Beale St. to the stained glass crowd
And I know that He can hear me if I cry out loud

post-script: If this post sounded like a rant, then my apologies for any disjointedness or incoherency in the thoughts. As far as my sounding angry... well, I'm ok with that. --N
Posted by Nance at 11:32 PM No comments:

A look at Walden Media and The Lion, the Witch, and the Wardrobe 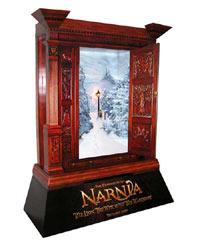 Well I can see that I'll be posting a lot about movies here...
I just found a neat interview with Micheal Flaherty, co-founder and President of Walden Media, the group, along with Disney, producing The Chronicles of Narnia: The Lion, the Witch, and the Wardrobe, based on
C. S. Lewis's classic, out this winter. If you want to know more about the man, the company, or just the film, check out the interview. I'm excited!

You can read about it Here. 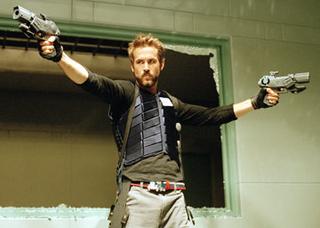 This is something that I've been wondering about for a couple of months now, I suppose it has been. The more films I see with these awesome 'man's man' characters, your Aragorns, Han Solos, John McClanes, Maximi, and the like, make me wonder why these characters are so awesome(in a literal sense) to the rest of us every-day guys. I watched Blade: Trinity last night for the first time, and Hannibal King(Ryan Reynolds) struck me as another of these supermen; he came into the film and a room full of vampires through a one-way window/mirror holding two pistols, wisecracking. So what is it about this sort of macho image that is so attractive to guys? Going down into the lion's den strong and courageous yet light-hearted. The thrill of danger... the same reason I fork out $17 everytime I'm at Six Flags to attach myself to a bungee cord and free fall for a few hundred feet for about 5 seconds. I think men are longing for that thrill(that's why we'll knowingly get ripped off for a poor substitute), and perhaps we hope we can experience it vicariously through these movie-men.
We've taken a look at this topic a bit in my British Literature class of late, comparing heroism as it is today, to its ancestor in the time of Beowulf, not to mention that I just recently finished reading Eldredge's Wild at Heart: Discovering the Secret of a Man's Soul, but for all the thinking I've done on it, I can really only come to one conclusion: the 'hero mold' has changed from a chivalrous warrior-knight to a polite, hard-working associate, boardmember, manager, or whatever fills in your blank. And men are still reeling from the change, left with a gut instinct to seek the action and adventure. No wonder the Lord of the Rings Trilogy brought in over a billion dollars at box office.
So now maybe all of us guys need to go bear hunting with a Bowie knife, or scuba-diving with a couple of great whites; I don't know. Maybe this change is good, a change in our manner to befit a constantly changing society, and we should go with it.
...I'd prefer to go with the former.

Well, you've suffered through my thoughts on the subject, and with a little energon and a lot of luck, they'll lead you to some of your own. have a blessed day