marriage advice from a monk 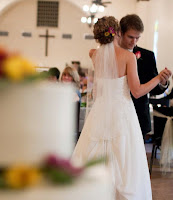 Today marks Emily and my one-year wedding anniversary, and what would anniversary festivities be without a commemorative blog post?

So, in honor of our first year of marriage, I thought I'd share this passage from John Chrysostom's Homily 20 on Ephesians 5. This sermon comes from a little collection called On Marriage and Family Life, which is one of the books Emily and I read together in the months leading up to the wedding. This passage in particular is one that has come back to mind for both of us on more than one occasion over the last 12 months. For a monk, Saint John has some surprisingly important words for married couples.

Throughout these sermons, he has been trying to cast a new vision of marriage for his people, to help them re-imagine what it means and how two people are related to each other in marriage. Here, he begins by describing a scenario: a man has married a rich woman, and now the couple are quarreling with each other over finances--whether she has been spending his money on new clothes, or the money she brought into the marriage. I've heard this kind of conversation before. Apparently Saint John has too, and he'll have none of it:

What are you saying, woman? Still wearing your own clothes? What can be worse than this sort of language? You no longer have a body of your own (since you gave it away in marriage), yet you have money of your own? After marriage you are no longer two, but one flesh, and are your possessions still divided? Love of money! You have both become one person, one organism, and can you still say, "my own"? This cursed and abominable phrase comes from the devil!