"second meanings" in the text 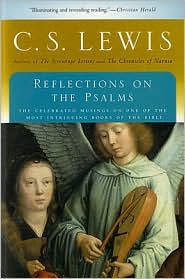 As my last post indicated, lately I’ve been reading C. S. Lewis’s Reflections on the Psalms, as I prepare to teach a Bible study on the Psalms for Spring Hill United Methodist Church this summer. It’s been some time (almost two years!) since I’ve been able to really read Lewis, and I’ve really enjoyed this visit with an old friend. He’s as interesting as ever.
In chapter 10 of the Reflections on the Psalms, Lewis is musing on the Church’s traditional claims that the Old Testament is often speaking of the New—that the ancient Israelite authors frequently speak about the events of Christ’s life or the doctrines of the Christian faith, though they probably do not know it. For instance, when St. Augustine read Psalm 18:9—“He bowed the heavens and came down”—he thought only of Jesus: the one who would “descend to men’s infirmity.” As Lewis puts it, “the full significance of what the writers are saying is, on this view, apparent only in the light of events which happened after they were dead.” This is one way the Church worked out the meaning of Jesus’ teaching in Luke 24:27 that “all the Scriptures” can be interpreted with reference to himself.
In the discussion that follows, the Inkling does not try to account for these “second meanings” in the Psalms themselves; that comes in a later chapter. Lewis does, however, consider this general idea of second meanings in texts, reading an author’s words “in light of that fuller truth and hearing it in them as an overtone or second meaning.” This, he suggests, is not “foisting on them something alien to his mind, an arbitrary addition,” but “prolonging his meaning in a direction congenial with it.”
Lewis sees this move as distinct from, on the one hand, claiming prophetic inspiration or, on the other hand, dismissing apparent similarities between an earlier word and a later reality as coincidence. Essentially, he’s looking for an agreeable rationale for the identification of, say, the Suffering Servant in Isaiah with Jesus Christ. The route he follows towards this rationale is, I think, brilliant and provocative—though I’m not ready to endorse what follows.

Two examples are crucial in his discussion. The first is a fiction. Suppose a biologist teaching on adaptation describes a hypothetical animal that has evolved in a particular, hypothetical environment. Some time later, such an animal is in fact discovered, and it is, of course, in just the sort of environment the biologist had described. “This resemblance,” Lewis claims, “is not in the least accidental. Insight and knowledge, not luck, led to his invention. The real nature of life explains both why there is such a creature in the universe and also why there was such a creature in his lectures.” The man’s intimate knowledge of the operations of the world refined and directed his imagination as he made an example for his students—refining and directing it towards truth.

The second example comes from the writings of Plato (c. 429- c.347 BC). In the Republic, the Greek philosopher suggests the righteousness may only be understood in its true nature if one imagines “a perfectly righteous man treated by all around him as a monster of wickedness. We must picture him, still perfect, while he is bound, scourged, and finally impaled (the Persian equivalent of crucifixion).” Is it a coincidence, Lewis asks, that Plato’s picture of righteousness evokes so clearly the death of Jesus some four hundred years later?

Plato is talking, and knows he is talking, about the fate of goodness in a wicked and misunderstanding world. But that is not something simply other than the Passion of Christ. It is the very same thing of which that Passion is the supreme illustration… If Plato, starting from [the example of Socrates, recently executed] and from his insight into the nature of goodness and the nature of the world, was lead on to see the possibility of a perfect example, and thus to depict something extremely life the Passion of Christ, this happened not because he was lucky but because he was wise. If a man who knew only England and had observed that, the higher a mountain was, the longer it retained the snow in early spring, were led on to suppose a mountain so high that it retained the snow all the year round, the similarity between his imaged mountain and the real Alps would not be merely a lucky accident. He might not know that there were any such mountains in reality; just as Plato probably did not know that the ideally perfect instance of crucified goodness which he had depicted would ever become actual and historical. But if that man ever saw the Alps he would not say “What a curious coincidence”. He would be more likely to say “There! What did I tell you?”

Because Christianity is true, the logic goes, Plato’s true insights centuries before Christ become entangled with that truth, and so can indeed be said to speak to the reality of Jesus. The Passion of Christ is a genuine second meaning of this passage in the Republic. It is not the meaning Plato had in mind, but it is "congenial with it."

(This is, I believe, how Lewis understood his own Narnian stories as well. What happens at the Stone Table in The Lion, the Witch, and the Wardrobe is not supposed to be an allegory for the death of Christ. Instead, it’s the story of another world where truth is still true. Aslan had to die, just as Jesus had to die, because this is simply how things are, and how things are redeemed. Good Friday is thus a genuine second meaning to the story.)

Lewis is not trying to prove anything here. He doesn’t present this discussion as evidence that the psalmists of ancient Israel (or anyone else) did in fact somehow write of Jesus of Nazareth centuries before his birth. He simply offers this as an explanation for why reading the Old Testament in this way may not be such a bad thing. Truth, which is perfectly revealed in Jesus Christ, will always look a certain way, no matter who says it or when it is said. Every now and then, the finest minds may just glimpse it, even if the revelation itself is still to come.

What do you think of this? Does this make Christian readings of the Old Testament any easier to swallow—if they were at all distasteful to begin with? What about Lewis’s assumptions about the nature of truth and revelation?

As I said, I think it’s a really brilliant discussion. Still, I’m quite sure where I stand on the question as a whole.

Email ThisBlogThis!Share to TwitterShare to FacebookShare to Pinterest
Labels: Lewis, the classics

It seems to me that one difference between the Psalms and Plato is that we claim that the Psalms, as part of the canon, were divinely inspired in a way that the Republic was not. The Psalms took a certain shape and form not only for cultural reasons, but also because of the Holy Spirit working at back of it all, precisely to ensure those layers of meaning.

Still the Republic does become all the more impressive: Plato there argues that the best political system would be rule by a philosopher king: an all-powerful king who also was all-wise and all-virtuous. And Jesus shows up proclaiming, and claiming to embody himself the kingdom or reign of the good and wise and powerful Creator God.

Plato says that a truly righteous man in a wicket world will face opposition, persecution, and an ignominious public death as he is hung on a stake: and that is precisely what happens to Jesus.

Then he rises from the dead (much to Plato's surprise, perhaps).

It simply amazes me how the Gospel story not only fulfills so many Old Testament hints and foreshadowings, but also the deep longings and expectations etched into the human heart that come out in some of the wisest and most introspective non-Biblical writers like Plato. It certainly makes one all the more convinced of "Natural Revelation" (contrary to the various Reformed groups who spurned such an idea).