While Disney's Peter Pan Platinum Edition DVD hit stores a few weeks back, now, I finally had a chance to check it out last night, and this DVD and the film itself are both worth a closer look in my mind.
Walt Disney's trademark when it comes to selling films is, of course, the vault, and the Platinum series of DVDs has been their way of bringing all of their most beloved films out of the vault for a limited time for DVD collectors and Disney fans everywhere to snatch up. Starting with Snow White and the Seven Dwarves, Beauty and the Beast, and on down the list of classics--The Jungle Book is due out next, later this year--Disney has been remastering their masterpieces and stuffing them full of special features. While I didn't actually get a chance to check out Pan's extras(some of which, including old interviews with Walt Disney himself, sounded pretty good), I can speak for the remastering of the film, which was phenomenal. The animation looked sharp and vibrant, and the sound quality was top notch. This sort of work is harder to notice on more recent Disney flicks like The Lion King or Aladdin when they get the Platinum treatment, but the much-older Peter Pan really shined.
But enough about the DVD, the movie itself, which I'd not seen in ages, was really interesting is re-viewing.
The conflict of the story, as much as it may seem to be centered on Pan and Captain Hook(who was a REALLY well done villain), is focusing throughout the story on the idea of growing up and on the character of Wendy Darling. She's forced to face the notion of growing up at home in London by Mr.

Darling(who is, interestingly enough, voiced by the same actor as Captain Hook, which is apparently sort of a tradition in adaptations of this story), and then whisked away by Peter to Neverland, where of course, one must never grow up. Yet in Neverland, Wendy doesn't fit in at all; the childish antics of Pan, the Lost Boys, even her own siblings, are unnerving to her as she is labelled "mother" and tries to keep order about Hangman's Tree. The one instance where Wendy actually seems to be really enjoying childishness again, when they are celebrating Tigerlily's return with the Red People(wow), she has adulthood thrown on her again as she's forced to gather firewood during the festivities.
You have to wonder as the movie ends if Wendy is really a dynamic character. She seemed to embrace maturity in Neverland, ironically, yet upon returning to London she is seemingly back to normal, i.e. being what her father would call 'childish' and enjoying life in the nursery with the boys.
I don't know that there's a powerful message in the film for everyone, but there's certainly a message, and it's very cleverly weaved into the tale, in my opinion. Either way, the classic film was very enjoyable, and is definitely worth another showing for those who haven't seen it in years, or even decades.
-N
Posted by Nance at 10:08 AM No comments:

"It is sin he condemns, not people", from Pontifications, is a selection from some work of St. Augustine concerning the whole "hate the sin, love the sinner" idea that you hear about on occasion, or perhaps that you see the occasional rally against(Tuesdays and Thursdays in free speech alley for LSU students, for example).
The only problem with this passage is that it is from Augustine, thus the people who need to hear this sort of message the most, associating him with the Catholic Church, would immediately dismiss it as rubbish. Of course, they'd likely find leave to dimiss it no matter who the speaker was, but that's beside the point.
Have a great week!

Email ThisBlogThis!Share to TwitterShare to FacebookShare to Pinterest
Labels: Christian living, other blogs

from Lewis's MacDonald Anthology, George MacDonald, something to think about:

I do not mean that God would have even His closest presence make us forget or cease to desire that of our friend. God forbid! The Love of God is the
perfecting of every love. He is not the God of oblivion but of eternal
remembrance. There is no past with Him.

Email ThisBlogThis!Share to TwitterShare to FacebookShare to Pinterest
Labels: authors and books, quotes

Inspired by such a post on Mere Comments, here's the question: what five books would you want if marooned on a desert island?

for starters, here are my picks:
1) The Bible; 2) The Lord of the Rings; 3) Pride and Prejudice; 4) Out of the Silent Planet; and 5) the largest volume of Shakespeare allowed me. At least including Macbeth.

Honorable mention goes to some works I've never actually gotten around to... I figure with all that time on my hands I could tackle The Republic or finally finish The Count of Monte Cristo and Walden among other things. I decided to leave them off though, and stick to what I've read.

Email ThisBlogThis!Share to TwitterShare to FacebookShare to Pinterest
Labels: authors and books, literature

book review: Till We Have Faces 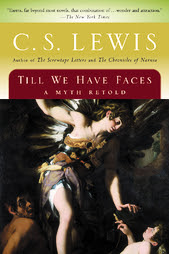 This semester at LSU, I'm taking a course called C. S. Lewis and the 20th Century Oxford Christian Scholars. While taking it wasn't exactly a paramount decision, it is easiliy one of the best ones I've ever made. The reading has been pretty varied so far: essays by Austin Farrer, Tolkien's On Fairie Stories, some Dorothy Sayers, selections from Charles Williams's theology and Lewis's Miracles, and then into fiction. Fiction of course included a bit of the Narnian Chronicles(The Lion, The Witch, and The Wardrobe, and The Magician's Nephew), and now we're at Lewis's favorite of his fiction, Till We Have Faces.
Wow that's a lot of reading... and plenty more to go. But I wanted to focus here on Till We Have Faces.
The novel is a retelling of the Greek myth of Psyche and Cupid. The central character in Lewis's version, however, is one of the sisters of Psyche, Orual, hardly a central character in the original myth. The novel's also divided into two books: Book I's the first 25-odd chapters, the story of Orual's life and her complaint against the gods who have wronged her, while Book II, the last 4 chapters, is, I suppose you could say, the response of the gods(almost like in the Book of Job).
While love is a major theme(ringing of The Four Loves), the real central theme in the novel is that of identity, with a lot of emphasis on Orual's face and her wearing of a veil or going bareface at different points and on her identifying herself only in relation to others(generally, the beautiful Psyche).
Without giving anything away, let's just say that the god's response to Orual's complaint in Book II very poignantly and beautifully brings together the story Orual tells in Book I, the myth of Psyche, and the truth about where one's identity is actually found(a truth very reminiscent of the sermons of George MacDonald).
While Book I is certainly not lacking for entertainment value, Book II offers infinitely more in the way of brilliant... well, theology. I'm hardly a book reviewer, but I couldn't not write something on all this. I'd definitely recommend the read for any fans of Lewis or mythology or to anyone who appreciates the works of the Inklings and the depth of the truths that they ardently weave into the work.
-N
Posted by Nance at 10:03 AM No comments: 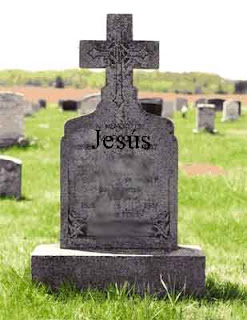 Fred Sanders at Scriptorium Daily discovered the grave of Jesus of Nazareth. This sounds pretty legit. Read for yourself here.